On July 17, Friday, Fan Plus released a statement on Twitter concerning the selection of draft designs for BIGBANG subway advertisements. 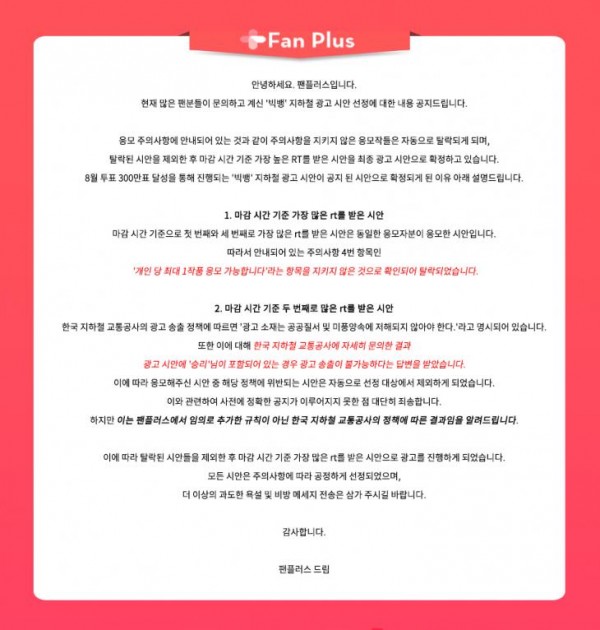 They began the statement by explaining that entries that failed to follow the guidelines will be automatically eliminated, despite it having the most retweets by the closing time. To submit a draft for a subway advertisement, fans could share their submissions on Twitter and whichever advertisement draft gets the most retweets would end up being selected as the final advertisement design to be displayed in subway stations. They reiterated this and said that they will only include retweets before the deadline.

They went on to say that the drafts which received the most and the third most retweets by the deadline were made by the same applicant, which has violated article four of the guidelines - only one work must be submitted per applicant. They stated that they will not be pushing through with their submitted draft due to violation of rules despite having the most retweets.

The advertisement with the second most retweets had featured Seungri, a former member of BIGBANG. He debuted with the group and promoted with them until 2019. That year, Seungri was embroiled in controversy following allegations of drug usage, arranging sexual favors for investors of his businesses, embezzlement, and more. Following police investigation, he was charged for procuring sex service, prostitution mediation, embezzlement of business funds for hiring a legal representative, embezzlement of Burning Sun revenues, attempt to destroy evidence, distribution of illegally filmed content through social message platforms, and violation of the Food Sanction Act. Later that year, he was questioned in connection with illegal gambling.

Seungri is curently serving his mandatory military service and will face trial in military court for his charges.

In regards to advertisements featuring Seungri, Fan Plus revealed that according to the Korea Metro's advertisement policy, advertisements should not be offensive to the public and public moral not disrupt public order. After discussing with Korea Metro in detail, they were told that it would be impossible to display the advertisement if Seungri were to be included.

The second most retweeted submission was eliminated because of that. They they went on to say that they chose the next draft with the most retweets that matched their criteria. They ended their message by asking fans to refrain from sending abusive and slanderous messages.

Previously, Fan Plus held a fan vote for celebrities and groups who would be celebrating their birthday or debuts on August. BIGBANG received majority of the votes, with their debut anniversary in August.

BIGBANG debuted in 2006 under YG Entertainment, originally with five members. They are regarded as one of the most influential artists to shape the K-pop industry and spreading the Hallyu wave internationally. They are dubbed the "Kings of K-Pop" by the media.

Former BIGBANG member Seungri retired from the group and the entertainment industry in March 2019, following the string of scandals, such as the "Burning Sun" controversy. They now promote as four members.