As we say goodbye to 2020 and say hello to 2021, Kuki News looks back on what happened in the music industry this year with relevant hashtags that best represent the year. Keep on reading to see what keywords they selected.

The first hashtag that was chosen is #Challenge. This year, TikTok became the latest social media platform to take the world by storm. According to TikTok's Year-End data, 176 songs were viewed more than 1 billion times on TikTok this year, which five of the songs being on Billboard's mains single chart, the Hot 100. In South Korea, Zico's "Any Song" challenge is considered a successful case of a TikTok challenge.

The "Any Song" challenge is fun and simple. All you need to do is follow some simple dance moves to the song's intro and chorus. The challenge was highly successful, with more than 810,000 videos using "Any Song" uploaded to TikTok. Thanks to Zico's amazing marketing tactic, "Any Song" topped the music charts for nearly a month. The challenge inspired other K-pop artists to make TikTok challenges, with many popular idol groups such as BTS, SEVENTEEN, and TWICE doing so for their music.

The second hashtag selected was #Trot. While trot has yet to make its global expansion, it saw a huge resurgence in South Korea thanks to TV Chosun's "Ms. Trot" and "Mr. Trot Series". The later series had a huge viewership rating of 35.7%, causing others to dive into trot once more. Currently. TV Chosun is airing the second season of "Ms. Trot," and it immediately recorded a nearly 30% viewership rating. Due to the rise in trot, stars like Lim Young Woong and Song Ga In are seeing huge popularity in South Korea.

The third hashtag selected was #Global. In 2020, K-pop successfully penetrated the Western market, with BTS at the forefront. Their song "Dynamite," which was released in August, became the first song by a K-pop act to reach the top of the Billboard Hot 100 and led them to be the first K-pop group to score a Grammy nomination. BLACKPINK, on the other hand, was able to collaborate with American powerhouses Lady Gaga, Selena Gomez, and Cardi B.

SM Entertainment's SuperM and NCT, JYP Entertainment's TWICE, and even Blockberry Creative's LOONA all chated in the Billboard 200, proving K-pop radical popularity that is taking up all four corners of the world. In 2020, K-pop was more than just entertainment; it opened up a new chapter in the industry.

The fourth hashtag is #MMTG. MMTG is a YouTube channel run by Jaejae, also known as Lee Eun Jae. The host's approach, affection, and respect for K-pop drew attention from her millennial and Gen Z viewers, who praised her for maintaining a joyful but not mocking attitude. She has been praised as the "Master MC" and has also been credited for reviving old songs from the 2010s to mainstream popularity, such as Teen Top's "No More Perfume On You."

The last hashtag that was selected in #Non-Face-to-Face. The current coronavirus pandemic has severed the physical connection between the artist and their fans. Large agencies, such as Big Hit Entertainment and SM Entertainment, were able to shift into purely online activities early on, setting up non-face-to-face concerts and video call fan signs. However, many indie labels and singles who are under smaller agencies suffered greatly from not having any physical shows.

The Ministry of Culture, Sports, and Tourism has previously announced that they would spend 29 billion won to support the production of online K-pop concerts, but industry insiders are skeptical if smaller groups would be able to draw in a profit. Hopefully, 2021 is kinder to everyone and we will be able to return to normalcy. 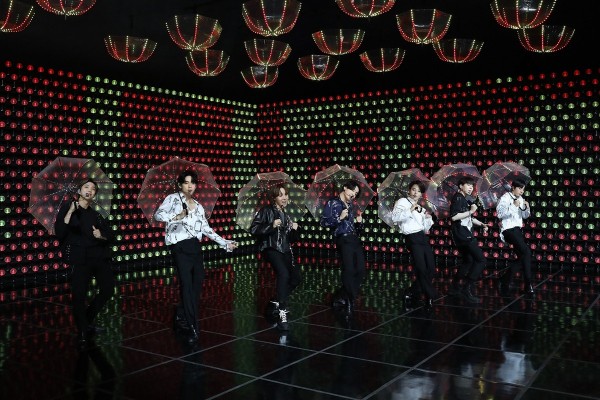 What hashtag do you think best represents K-pop? Tell us in the comments!