Starship Entertainment boy group CRAVITY continues to excite fans everywhere as they head towards the release of "THE AWAKENING: Written on the Stars," teasing fans with various materials along the road.

The campaign toward the CRAVITY comeback began last July 27 by announcing the name of the album and releasing the full promotional schedule leading to "THE AWAKENING: Written In The Stars" hitting the shelves and the digital music platforms on August 19. Then, it released the tracklist for its new album on August 3, showing eight tracks over a blurred picture of the group. The album is set to include tracks such as "Veni Vidi Vici," "Chinga-Linga," "Grand Prix," and more. 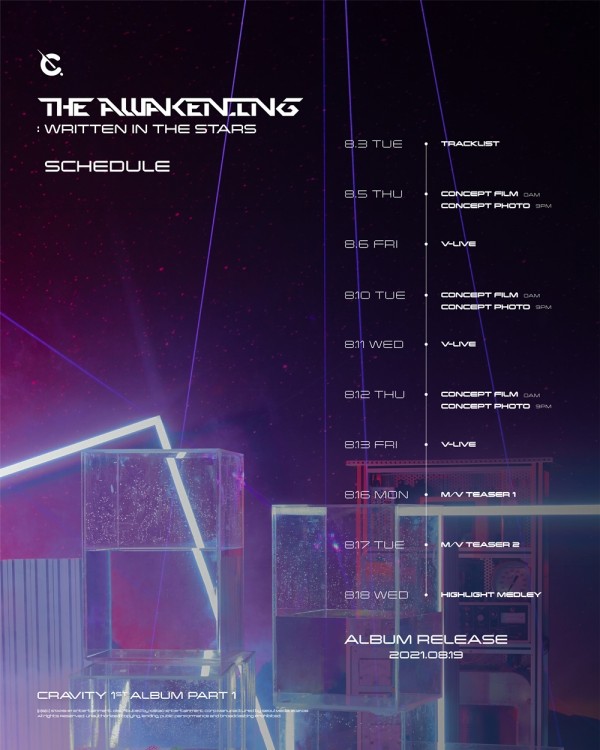 Afterward, CRAVITY is set to release three sets of concept film teasers and concept photos across August 5, 10, and 12, giving fans more pieces about what the album will be about. These concept media releases will be woven together with the group's scheduled appearances on Naver V LIVE on August 6, 11, and 13 - allowing the members Serim, Allen, Jungmo, Woobin, Wonjin, Minhee, Hyeongjun, Taeyoung, and Seongmin to bond with their beloved LUVITY.

A pair of music video teasers for the title track of "THE AWAKENING: Written In The Stars" is expected to drop on August 16 and 17 before a highlight medley special on August 18 from the Starship Entertainment K-pop boy group themselves. By August 19, "THE AWAKENING: Written In The Stars," the first full studio album from CRAVITY, will be available in both physical and digital formats.

CRAVITY received wide acclaim and attention following their debut with the mini-album "CRAVITY Season 1. Hideout: Remember Who We Are," the first of a trilogy of releases, each being warmly received both by fans and critics. With their solid performances and impeccable harmony as a single unit - soon earning the distinction of being their generation's monster rookies. As they move towards the release of their first full studio album, CRAVITY is set to achieve new heights and accomplish more as must-see members of the K-pop industry.