Fans expressed their worry after noticing Momo's trembling vocals while singing "MORE & MORE," their new title track, after winning the trophy from the music show. This incident took off even more after a thread was created on a web forum, generated from fans' Instagram posts, with online users sharing their two cents regarding Momo's voice. 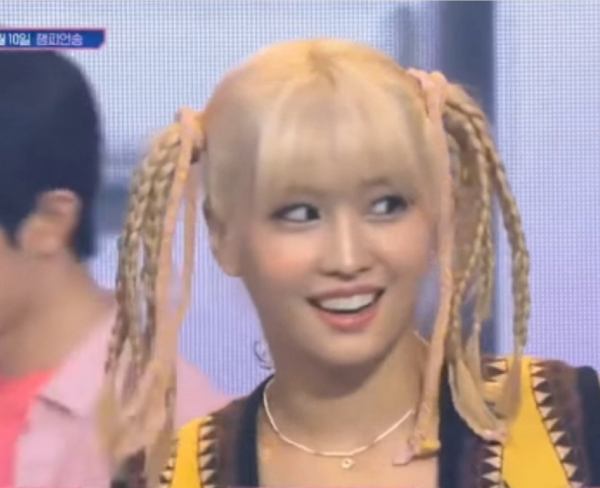 "We understand exactly that Momo could really sing and rap from the sixteen competition show and first albums, but then why do you honestly believe she's trapped in songs with that aegyo tone? It's just making me sad. Do you believe she's going to start changing with a much more mature concept? I want to see more dispersed songs with units and hear the vocals of Mina's, Momo's, Tzuyu's, Sana."

"Wondering, but I personally believe JYP made / told her so?) (sounds like that to give her a distinctive voice to know her momoring, not the other participants. This is just my perspective: D"

"Yeah, Momo had been singing with the Aegyo tone after "Ooo Ah." It has continued to work for her as her portions are clearly Momo. It is difficult to (vocally) stand out in a group of nine members."

"Momo is taking the throne with her potent and seamless dance moves when it comes to the choreographers in TWICE whose skill sets pack a punch.

While she doesn't have that much opportunity to showcase her equally talented singing, she made it clear that it didn't really come simple and easy for her.

She started opening about how she used to feel afraid of singing as a trainee in TWICE: Seize The Light - to the point where she burst into tears. Momo really doesn't just want to refrain from taking vocal lessons. She'd been afraid to participate in them all.

She clarified she'd shed tears before they could even start, saying, "I was so concerned about this that I started crying before class. I was so extremely anxious even before First Class."

She had reasons to be so scared."

"Momo did not think she was competent enough to take a vocal lesson. "I was always like, 'Oh, I'm so terrible at singing," and would always cry in the singing training studio.

But Momo did not let it deter her, even though she had trouble overcoming her fear of singing. She forced herself to take responsibility and change after she cried.

"Maybe, you just have to confront your doubts and overcome your shortcomings to accomplish your goal. It's not a waste to have a bit of a cry to relieve the disappointment," a netizen wrote.

Finally, she achieved strength of character by being a TWICE member and rewarding us with her singing and dancing."

Momo was chosen as the 20th most successful South Korean star in Gallup's 2018 annual entertainment survey. She is among Korean K-pop's most successful non-Korean celebrities and has been noted by the Chosun Ilbo for her success in growing relationships between South Korea and Japan.

Momo was previously identified as the best dancer of TWICE and has been chosen by choreographers and dance experts as one of the best dancers in K-pop.