On Lancome's official YouTube account, an online live broadcast was participated by the former Miss A member and actress Bae Suzy to introduce her upcoming short film.

Along with Director Kim Ji Woon and actor Nam Yoon Soo, the main characters and the director revealed some things that should be anticipated in the film, "If my Item is Still at Your House, We Haven't Broken Up" (literal title).

On the broadcast and interview, it was then revealed by director Kim that the movie scenarios for the film were actually written based on Suzy's mid-length novel.

Kim said, "The original work of came from Suzy." "There's a mid-length novel that Suzy writes secretly, I read it and made a story based on the engaging parts."

When Cho Woo Jong, the host of the show, asked if the screenplay was written by Suzy, Director Kim said that it was him who wrote it with a smile.

Meanwhile, Suzy narrated how she was able to turn her not published novel into a film, saying, "There were stories I was writing with satisfaction, and when I started this project, I was talking to the director and he chose a story I liked, and he adapted it for me," Suzy said. "It's such an honor for me."

When asked how he felt about working with Suzy, director Kim also said, "Suzy had already debuted ten years ago, but she is still pure," adding, "She is also natural and innocent in her acting." However, she is flexible. And as you all know, she's so beautiful." 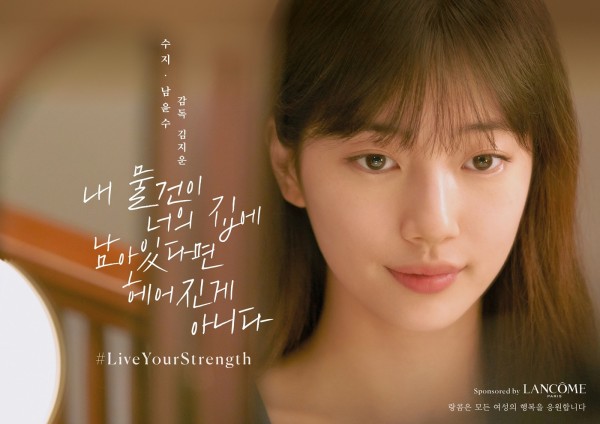 On the other hand, "If my Item is Still at Your House, We Haven't Broken Up," tell the story of what's the aftermath of breaking up with your lover whom you think will stay with you forever. The film will revolve on the female's point of view, which will describe the mix and various emotions that a person can feel and experience after a sudden breakup. In addition to this, the film will also convey that though it is painful, you can overcome it, enter a new beginning, and reach for your growth and happiness.

The short film is a project launched by the cosmetic brand Lancome. The brand carries plans and campaigns for women, and this year's slogan speaks about "Live Your Strength."

"If my Item is Still at Your House, We Haven't Broken Up" was released on KakaoTv on September 4.

Currently, Suzy is also gearing up for her small-screen comeback co-starring with actor Nam Joo Hyuk for Netflix's "Start-up." According to reports, the show will start airing in October.