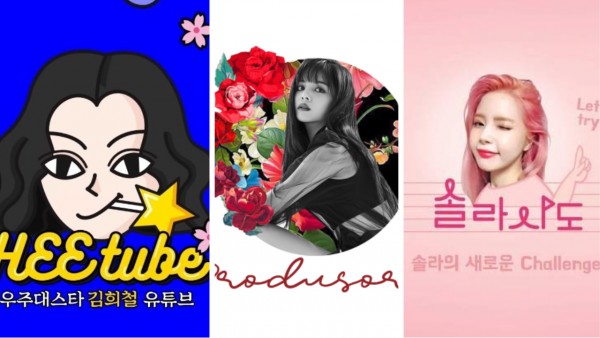 Idols have strictly scheduled activities, practice, recording, production, post-production, choreography practice, photoshoots, and innumerable other activities that they are committed to. As such, there is a minimum period that they get to express themselves in the ways they like and enjoy genuinely. To do that, different idols have different outlets of energy—some like gaming, others like painting, and some just like getting some rest in. Similarly, there are a bunch of K-Pop idols that actually spend that time making youtube videos and have a massive following on their channels as well. Here are some K-Pop idols that have their youtube channels!

Amber has had her Youtube Channel for more than five years now, having started on April 3, 2015. She currently has 1.46 Million subscribers and tons of videos with her and her friends. Sometimes they do fun activities together, and sometimes they're straight chilling. Overall, her channel is perfect for you if you want to see friends having fun (and most of those friends are often idols as well, such as Eric Nam and BTOB Peniel).

Jae's Youtube channel used to be called JaeSix back when he uploaded fun roadside interviews and interviews with friends as well as casual vlogs and "day in the life" videos, which he conveniently called "A Jae in the Life." Since he started doing music solo under his title "eaJ," he changed the name of his Youtube channel to eaJ. The channel currently has over 946K subscribers.

Sorn has a successful Youtube career besides her successful idol career, and she posts content quite often which includes covers of songs, makeup tutorials, daily vlogs, and collaborations with other idols like BLACKPINK Lisa and CLC Elkie. She also posts speed painting videos, reaction videos and often goes live as well. Her channel is called PRODUSORN and has 38 videos with over 564K subscribers. She has said in videos that she speaks in both Korean and English to help people speaking either language learn the other.

Mamamoo's Solar also boasts a Youtube channel "솔라시도 solarsido" with over 2.37M subscribers and 152 videos. She posts quite regularly on her channel, and her content is usually song covers, challenge videos, vlogs, and live streams. It's a treat to watch her be herself on her videos are they're all must watch videos too!

EXO's Chen also has a beautifully calming Youtube channel 'CHEN' with over 1.7M subscribers where he posts covers of Korean songs. Every post he makes gets millions of views and for good reason as his videos are always very well produced and high quality. It's the perfect place to go if you want to listen to some soft, melodious music and unwind after a long day.

Heechul is a well-known entertainer in his own right, and that shows in his Youtube videos. His channel is called "김희철 KimHeeChul," and he has over 475K subscribers with 149 videos. Heechul is perhaps the most YouTuber-y of all the idols on this list as he is very comfortable on camera as he lives streams, does Q&A videos, ASMR sometimes, vlogs about his pets, and so forth. Hop on to Heetube now for a healthy dose of his incredible life!