K-pop giant BTS joins the "power couple" Son Ye Jin and Hyun Bin as the new ambassadors for SMART Communications, one of the biggest telecommunication companies in the Philippines!

On Monday, Jan. 18, major Philippine news outlets announced that the K-pop powerhouse will be the new face of the telecommunications company. The telco also shared some details about the first campaign of the seven-piece outfit, which will be released any moment this first quarter of 2021, so PH ARMYs, watch it out!

Let RM, Jin, SUGA, j-hope, Jimin, V and Jung Kook light up the year as they inspire the Filipino youth to keep pursuing their Passion with Purpose.#SmartBTS #SimpleSMARTAko
💚💚💚 pic.twitter.com/HN0ZL0hQ0c

On the same day, the CEO of SMART, Alfredo Panlilio, who introduced the worldwide boy band as their new ambassadors, also revealed the reason why they selected BTS.

According to Panlilio, BTS, referred to as the "biggest band in the world," doesn't only excel in the industry with their exceptional talents but their uplifting and meaningful music also give hope and encouragement to fans, particularly K-pop enthusiasts in this time of pandemic, and other unfortunate events.

The CEO added how it is a huge honor to have BTS in their SMART family, wherein hands together with the group, they can give inspiration and become a catalyst for Filipinos to find their purpose for everything and towards living smarter lives -- for a better world.

So Filipino ARMYs (BTS fandom) should anticipate what's coming as the telco also hinted at an ad campaign about to kick off in the first quarter of the year!

In addition to this, the telco official also hinted that the concept of the campaign is to show the support of the group for Filipinos, especially to the youth. SMART, now together with BTS, aims to inspire the Filipino youth to "live smarter" and to "live with a purpose" through the septet's music.

Meanwhile, BTS will join the reel-to-real couple and "Crash Landing on You" stars Son Ye Jin and Hyun Bin as the newest members of the SMART family. The three Korean acts are expected to boost the telco companies' goals and campaign through their individual strengths and ads. 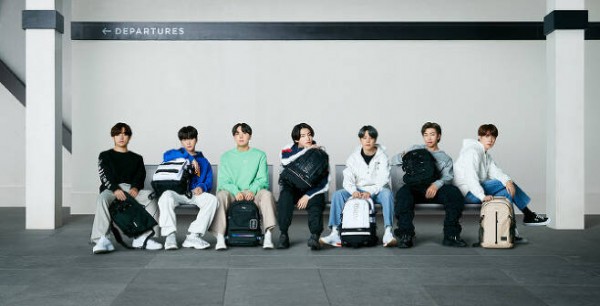 In other news, BTS proves they are not only music icons but are deserving and laudable representatives of brands and companies, like the global sports brand FILA, which dropped the group's new photo set on Jan. 18.

The concept of this pictorial is "new beginning," wherein the members gathered on a platform, alluding to a new start. The BTS members Jin, RM, Suga J-Hope, Jimin, Jimin, V, and Jungkook flaunted FILA backpacks, ensembles, and footwear that fit their visuals and personalities.

An official from FILA said, "We planned a new product with the meaning of cheering for everyone who has a meaningful start in the new year."