On the latest episode of MBC Every1 entertainment program "Video Star," which aired on the afternoon of March 9, the interaction between YG senior and junior idols drew attention from fans. 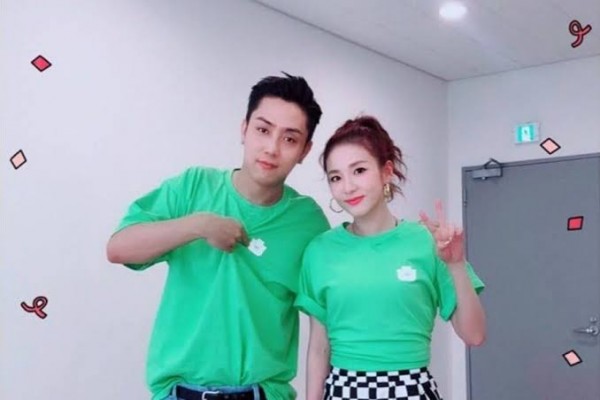 In the episode, the lovely atmosphere between the female star Dara and K-pop icon Ji Won made fans cheer for them. Among other MCs, Dara showed her excitement seeing the male rapper again, as it is not a secret that she has an unrequited crush on him for 24 years now.

On the same show, the two senior idols' previous interactions were also reviewed in the episode. Dara confessed, "Just looking at his (Eun Ji Won) silhouette attracts me." In fact, the two also shared a "Star Date" broadcasted on Dara's YouTube channel, granting a nostalgic date with her high school ultimate crush!

The female idol even narrated how her feelings for the idol started, saying, "Since I was in the Philippines in 1997, I have been a fan for 24 years. I felt like I had such a great brother on TV. I liked him better (after the date). I gave him a game console with my own heart, but nothing happened."

Eun Ji Won then defended himself and responded, "I was always thankful and embarrassed to Dara, as I didn't want to make mistakes and wanted to be careful." But Dara teased him more by saying, "I hope you make a lot of mistakes."

As the episode went on, the MCs and guests can't help but smile when Sandara and Eun Ji Won were requested to do the "staring game." But Sandara was defeated and eventually freaked out. They then both explained, "I tried really hard, but I was ashamed."

Dara: *freaks out because of her eye contact with Jiwon*
Mino: Noona! You told me you won't date within the company!

ALSO READ: Sandara Park Reveals She Has a Crush with These Two Celebrities

Meanwhile, it was also revealed in the episode that WINNER Song Mino picked his senior Dara as the person he had a crush on.

The male idol even confessed he was looking forward to the show's filming, as it's been a long time since they saw each other again.

Later on, when the MCs talked about Dara's unrequited crush on Eun Ji Won and showed his fangirl reaction in front of the idol, Mino then questioned Dara, "You said you can't have a relationship with your labelmate!!" giving a good laugh to both MCs, guests, and viewers.

On the other hand, Sandara Park, a longtime fan of Eun Ji Won, became senior and junior when the latter moved to YG Entertainment in 2016.