Recently, YouTubers Void and Keemstar released a video titled "KPOP STANS DISSTRACK." The video has received massive backlash due to the usage of photos from the funeral of the late SHINee member Jonghyun.

During the video, there is a line that reads, "I wonder why lately, man, they all committing suicide."

Along with this line includes photos of the late SHINee member Jonghyun's funeral, Jonghyun singing, and fans mourning his passing. 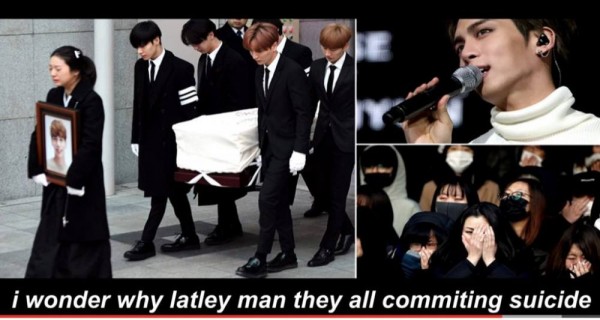 Upon seeing this, fans slammed the two content creators for mocking Jonghyun's passing and making a joke of suicide. People demand the video be removed.

However, as it appears the two creators will not budge, fans are taking matters into their own hands and calling for fellow K-pop stands to report the video.

After the video got published, fans took to Twitter to demand an apology from the creators in question. Some also sent malicious comments and death threats to the content creator.

In another video 40-second video, KeemStar states that he is not guilty of making fun of anyone's suicide, stating he is "100% innocent." He states Void is to blame, as it is his lyrics, and he is the one who edited the video. He explicitly states that he is throwing Void "under the bus."

In another video shared to his Twitter, KeemStar addresses K-pop fans specifically, saying he did not know that a K-pop star committed suicide. He also states that K-pop fans are extremely annoying on Twitter, as they spam tweets with their fan cams and jump on every trending topic to promote their artists.

He agreed to join the diss track with Void after it was offered to him.

He then defends Void, despite throwing him under the bus in a past tweet.

In the video, KeemStar states that he listened to the diss track and says that Void is not insulting Jonghyun but instead was making fun of the K-pop industry as a whole and how they put pressure on the K-pop stars and push them to that points.

However, he does tell fans that it is up to their interpretation.

He once again stressed that it was not his part of the diss track, and it is not his song. KeemStar states that Void edited the video and uploaded it to his channel.

KeemStar also states that K-pop fans are sending death threats and making jokes about his mother passing away.

Unfortunately, he has not yet finished talking to the K-pop stans.

In another tweet, he shared a series of screenshots of death threats he received from K-pop fans. He then states that his science advisors estimate he will live until the age of 157. He also mentions that he has stem cell injections monthly to repair his aging DNA and that he has invested in companies that will back-up his organs in case his organs fail.

To the Kpop Stans wishing for my death.

1. I have invested in multiple companies that our developing back up organs in case one of my organs fail.

2. I have stem cell injection’s monthly to regrow & repair my aging DNA 🧬

3. My science advisors estimate I will live to 157. pic.twitter.com/ULjAPF4Izb

He says that K-pop fans are lying in another tweet and that he is "innocent, and you know."

KeemStar asks K-pop fans for proof that he made fun of a K-pop star who passed away and that fans will be unable to because he never did such a thing.

Lol, y’all lying so much.

I’m innocent and you know. You keep spamming I made fun of the Kpop star who passed away.

You can’t prove cus I never said any of that. I was featured in the song & said none of that.

You caught in 4K HDR Lying!

In another tweet, he reiterates that he did not know who Jonghyun is and that he passed away. He also adds that he never saw the finished video or song and that he merely sent Void his part back in Oct. or Nov. of 2020.

1. I didn’t know he passed away or even who he is.

In a newly posted tweet, KeemStar demands a full apology from K-pop stans who allegedly falsely accused him of making fun of Jonghyun's passing and for making fun of his mother, who has passed away.

Dear Kpop Stans , like I been saying I’m innocent!

I DEMAND A FULL APOLOGY FOR FALSELY ACCUSING ME & FOR ATTACK MY DEAD MOTHER KNOWING FULL WELL SHE CANT FIGHT BACK! #KpopCowards ! https://t.co/8T6f6WKkQl

Void has released a video to Twitter following the backlash he received. Void states that KeemStar sent his lyrics and recording to them and that KeemStar did not see Void's edits nor their parts.

They then explain the controversial line, saying that they are talking about the companies and how they aren't treating their talents right. They then explain that when Jonghyun passed away, many K-pop stans blamed the pressure the K-pop industry puts on idols, and that was the same sentiment they were trying to express in their lyrics.

They stress that they are not making fun of or mocking anyone's suicide. They also add that they never made fun of eating disorders after fans found controversial lines concerning idols and their diets.

Void then goes on to say that K-pop fans are not accepting of criticism and that whenever K-pop stans hear comments about K-pop they do not like, they immediately label it as xenophobic or racist. "You can't take one f**king minute to realize something is wrong with the K-pop industry," they say just before the video ends.