On Feb. 26, Wonho released a new album entitled "Love Synonym Pt. 2." In the newest episode of "DJ Wonho's Special Radio," he revealed that he was under lots of stress as he faced multiple difficulties while preparing his new album.

On Feb. 26, Wonho marked his comeback with his second mini-album, "Love Synonym Pt. 2: Right for Us." His new album is comprised of eight songs, including his self-written and self-produced singles, as well as the title track "Lose," which is one of the songs the male idol wrote along with Brother Su.

ALSO READ: Wonho Stuns on the Cover of e.L.e Magazine

"Lose" features heavy electric bass and minimal guitar sounds, plus it gives retro vibes. The song is about the ups and downs of a relationship that cause the couple to deal with mixed feelings.

Wonho Confesses that He Experienced Stress While Working on His "Love Synonym Pt. 2" Album

In the latest episode of "DJ Wonho's Special Radio" uploaded to Wonho's YouTube channel on March 25, the male idol appeared with Enan, the main producer for Wonho's "Love Synonym Pt. 2: Right For Us." The two talked about the time they were preparing the album. And there, Wonho unveiled the difficulties he faced while working on it.

READ MORE: Fans Are Angry and Disappointed About Starship's Official Announcement Regarding Wonho

During the talk, the male idol revealed that his new album "Love Synonym Pt. 2" was initially planned to be a full-length album but couldn't be launched as such. The reason for this is that most of the work will be handled by Wonho and Enan and that they had a very tight schedule all the time. Hence, it was hard for the two to finish the full album in such a short time. 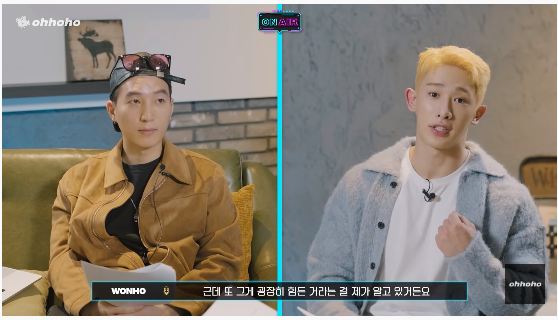 Wonho then confessed that he started to get stressed out. "My stomach started hurting and my vocal cords were damaged. Then, I ended up with vocal cord nodules. After that, I had acid reflux," he shared.

Because of that, he couldn't finish the full album, so he had to release it as a mini-album. Wonho continued, "From all that, I was very stressed out and felt stuck, really."

YOU MIGHT ALSO LIKE: Why Did Wonho Name His Fandom WENEE? Find Out The Special Meaning Behind It

Enan then stated that they were recording way too much at that time and that he eventually grew worried about Wonho's condition.

"I was actually yelling and screaming inside the booth during the recording session. I was just that much stressed out about everything. I was so mad at myself," he added.

Watch the whole video below!