BTS Jimin's costume, which has been unwashed since 2020, will be auctioned off.

In September 2020, BTS performed "IDOL" at Gyeongbokgung Palace for NBC's "The Tonight Show", in which the performance featured the BTS members wearing hanbok, a traditional Korean clothing. 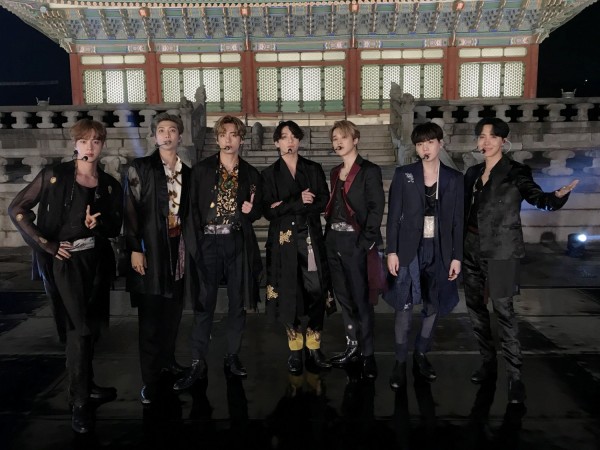 According to media outlets, Myart Auction, an auction company based in Seoul that specializes in Korean arts, will be selling BTS Jimin's unwashed hanbok that he wore during the performance for "The Tonight Show" as a way to raise awareness on its first ever online auction.

YOU MIGHT BE INTERESTED IN: BTS RM Relationship Status 2021: Truth About MAMAMOO Hwasa, TWICE Chaeyoung and Ailee Dating Rumors

The hanbok that Jimin wore has remained unwashed since September 2020, and according to Myart Auction, is a "work of art that is unique" and has Jimin's body odor unscathed from the clothing.

A represenative of Myart Auction revealed that the auction company contacted the designer for BTS's hanboks in the performance, Kim Ri Eul, who initially hesistated on putting the hanbok on auction, but later agreed to do so as it relates to his work on integrating tradition with modernity.

The hanbok will be featured under the slogan, "Tradition meets modern art to make the best," alongside other traditional modern and contemporary works.

YOU MIGHT BE INTERESTED IN: BTS Jimin Named 'Best Male Dancer' for the 3rd Time + Beats GOT7 Yugyeom, TVXQ's Yunho, J-Hope, Jungkook and More

This is not the first time an item used by BTS has been auctioned off.

In January 2020, a microphone used by BTS during their "Love Yourself" tour from 2017 to 2019 had been auctioned and sold for a whopping $83,200 by Julien Auctions, an auction company based in the United States.

In addition, the auction company also auctioned and sold BTS's pastel-colored outfits from their music video for the popular song "Dynamite" for $162,500.

BTS has been known to be one of South Korea's main economy boosters for their contribution both domestic and international.

According to the Korean Foundation for International Cultural Exchange's research in 2018, 7.6 percent of the country's foreign tourists in 2017 were motivated to visit the country due to BTS.

Because of BTS's contribution to South Korea, the group was awarded the "Order of Cultural Merit" for their services in the field of culture and art, and promoting interest in national culture and national development.

You can check out Myart Auction's official site here.