WIZ*ONEs have gathered more than 1.8 billion won to help relaunch the group.

Fans of IZ*ONE, WIZ*ONEs are gathering funds to help relaunch the group in light of their pending disbandment.

The funding is a project organized by the Parallel Universe Project Committee - WIZ*ONEs, as a way to help relaunch IZ*ONE after their pending disbandment, which is set to be by the end of April after the group's contract expiration.

According to reports, the funding project was made to prove the purchasing power of IZ*ONE's fandom and be able to predict the revenue that would come when the group relaunches, in addition for each member's agency to be able to participate in the relaunch as well. 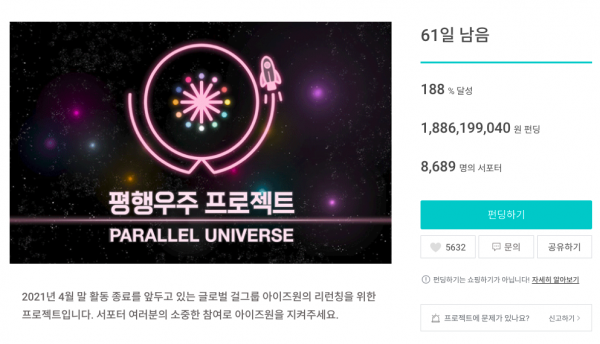 The funding project will end on June 21, giving WIZ*ONE's 61 days left to participate. In addition, the funding project has already exceeded their minimum target amount of 1 million won by 188 percent through 8,689 supporters.

According to one of the fans organizing the funding project, 13 WIZ*ONEs have already funded 10 million won ($9,000) each for the project.

The Parallel Universe Project Committee announced that the target amount of 1 billion won is for the funding to negotiate with agencies and affiliates for IZ*ONE's basic management costs such as their accommodation, managers, incomes for staff, and the initial cost of producing an album required for relaunching the group.

In addition, the Parallel Universe Project Committee explained that those who fund the project will be issued an online certificate by the Committee and will be given detailed updates with their negotiations with IZ*ONE'S agency through e-mail.

Fans will continue to make ceaseless efforts to relaunch the group and will do whatever they can, they announced.

Meanwhile, IZ*ONE is a Korean-Japanese girl group formed through Mnet's survival show "Produce 48" that was broadcasted in 2018 and consisted of twelve members. The group made their debut after the show with their first extended play, "Color*Iz." Since then, they have released hit songs such as "La Vie en Rose," "Violeta," and "Panorama."

On March 10, Mnet made a statement regarding their pending disbandment. According to them, Mnet, Swing Entertainment, and Off the Record have been carefully discussing and negotiating with each of the member's agency in regards to their best course of action and activities before IZ*ONE disbands. They also revealed that IZ*ONE is scheduled to disband by the end of April.

Check out the funding project here.

What are your thoughts on the funding project?