On Monday, May 10, HYBE Labels released the concept trailer for TXT's upcoming comeback. After being accused of plagiarizing Burberry's Nov. 2020 ad, the Burberry advertisement's director commented on the situation.

On May 10, TXT dropped the concept trailer for "The Chaos Chapter: FREEZE."

In the video, TXT is seen inside a mall, dodging hail that falls from the sky. The boys are seen jumping, ducking, and dancing as they try to avoid being hit by hail.

Fans were eager and excited to watch the clip, but many had noticed a resemblance with Burberry's advertisement from 2020 with a similar concept.

While TXT's trailer shows them in a mall, Burberry's advertisement shows people avoiding hail falling from the sky outdoors. People are seen narrowly moving away to avoid being hit by hail.

Soon, a group of people are jumping, dancing, and having fun as they try to avoid being hit by hail. Of course, they are all wearing Burberry.

After comparing the two clips, people could not deny the similarities between the two. People believed the concepts were too alike to be a coincidence.

Others also pointed out that the background music TXT and Burberry used is similar.

Following speculations of plagiarism, one netizen reached out to the director of the Burberry advertisement, Charles Brisgand, through Instagram.

The netizen pointed out the concept trailer had many similarities to the Burberry advertisement and asked if they believed the group had plagiarized his work. 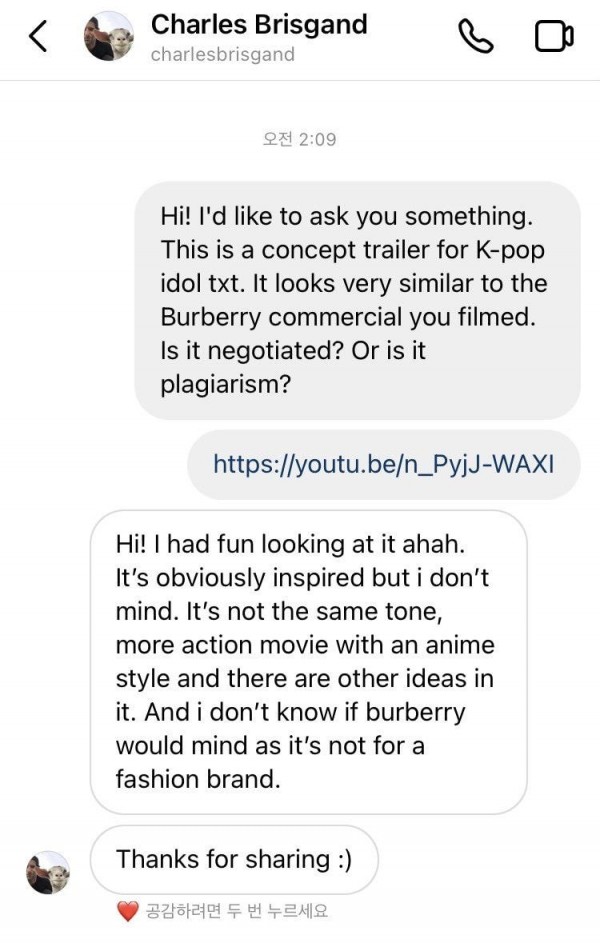 Charles Brisgand responded to the netizen's message, saying they had not known about the trailer but had fun watching it. While he acknowledges that TXT's trailer was "obviously inspired" by his work, he states he does not mind.

Charles Brisgand noted that the tone of the video is not the same, with TXT's concept trailer leaning towards a more action movie, anime-style take.

Charles Brisgand also comments that no other ideas were stolen from the Burberry brand.

Finally, he commented he does not mind TXT taking inspiration from his works, as they are not promoting a fashion brand.

Charles Brisgand thanked the netizen for sharing TXT's trailer with them.

HYBE Labels (Big Hit Entertainment) has not commented on the situation. However, Charles Brisgand's comments have helped lessen the backlash TXT had been receiving.