In the latest interview with Billboard, BTS talked about their upcoming full English-language single "Butter." The septet has also given the fans the first look into the song's music video in a new teaser. 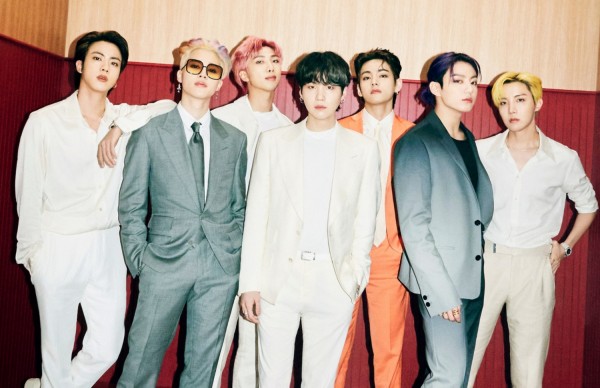 BTS Talks about Their New English Single "Butter" with Billboard

On May 19, the Billboard magazine shared an interview they recently had with BTS, with all seven members - RM, Jungkook, J-Hope, Jin, Suga, Jimin, and V - present.

Billboard's Tetris Kelly spoke to BTS about their upcoming English single "Butter." He asked the boy group about the difference between "Dynamite," their first full English-language song, and "Butter."

BTS J-Hope answered that the recording process went smooth for "Butter." He added that their two English-language singles are different from each other, with "Butter" focusing more on each of the members' charms.

Earlier this month, BTS leader RM told Rolling Stone that "Butter" will be "very summery" and "very energetic." He also revealed that the song will have a "very dynamic performance."

BTS is set to perform "Butter" at the 2021 Billboard Music Awards. The boys are even finalists in four categories at the show: Top Selling Song, Top Social Artist, Top Duo/Group, and Top Song Sales Artist.

During the interview, Billboard's Tetris Kelly asked the septet which category they are most excited about. BTS Jungkook answered, "All of them." He explained that all of the categories are meaningful so they are looking forward to each of them.

The 2021 Billboard Music Awards will be held at the Microsoft Theater in Los Angeles, California on May 23 at 8 p.m. ET and will be streamed live via NBC.

On May 19 at midnight KST, BTS dropped the music video teaser for their much-awaited single "Butter."

Other than that, the funky bassline playing in the background and the head bop are other noticeable points in the music video teaser. It is reminiscent of the song "Another One Bites the Dust" by the legendary rock band Queen.

YOU MIGHT ALSO LIKE: BTS Dominates the Top 5 of Billboard's World Albums Chart + BLACKPINK Makes Appearance in the Ranks

Toward the end of the MV teaser for BTS's "Butter," member Jungkook sings "Get it, let it roll!" The clip then shows a close-up scene of three stacked pancakes topped with butter and syrup.

Following its release, the "Butter" music video teaser has gained more than one million likes in under 45 minutes, becoming the third-fastest MV teaser to get a million likes on YouTube after "Dynamite" and "Life Goes On."

At the time of this writing, the video has accumulated 2.8 million likes and 18.3 million views.

According to Forbes, BTS's comeback single "Butter" is heading for a big debut on the Billboard Hot 100 chart based on early metrics.

Check out the music video teaser for BTS's "Butter" below!