After filing to trademark BTS' coined term, "Borahae," the cosmetic company has apologized and canceled the application.

On May 31, KST, the cosmetic company, LALALEES, released an apology statement on their official website regarding their trademark application on the term "Borahae."

The company also revealed that they have decided to withdraw their application to trademark the term for K-Pop's future development and will take action as soon as possible.

IN CASE YOU MISSED IT: German Radio Host Who Compared BTS to COVID-19 Got Fired From Show 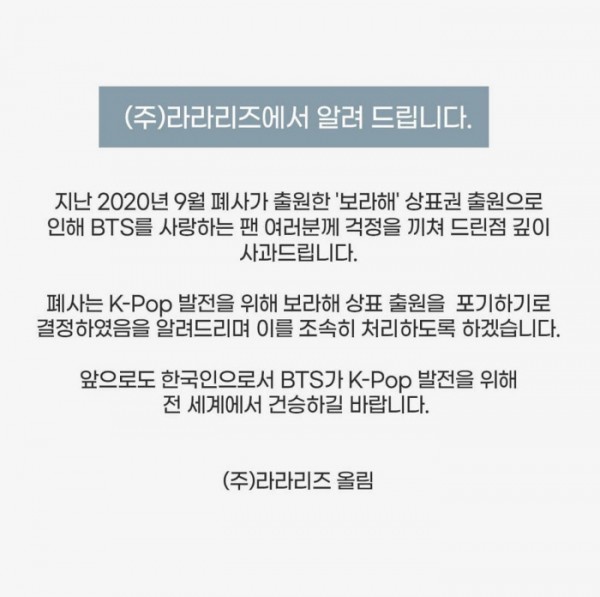 It was previously reported on May 29 that LALALEES, a Korean cosmetic company that specializes in nails, had applied for trademark rights over the term "Borahae" back in September 1, 2020, under the classification of fragrances, essential oils, soaps, hair products, polishes, cosmetics, and cleaning agents.

However, upon reports that the cosmetic company had wanted to get trademark rights over the term, BTS' fandom, ARMY, expressed their concern and astonishment on multiple social media platforms.

"Borahae" or "I Purple You" is a term and phrase coined by BTS member V back in 2016 during a fan meeting, where he first used the term meant to trust and love each other until the end just like the last color of the rainbow. After V had first started using the term, both BTS and ARMY followed suit and have started using "Borahae" as a way to express their support, bond, and affection for each other on countless occasions.

IN CASE YOU MISSED IT: BTS Takes Home Two Awards at the 2021 iHeartRadio Music Awards

Since then, "Borahae" has become a symbolic term that is known to represent BTS and their color. In their recent collaboration with McDonald's, BTS' "Borahae" can be seen on the packaging of their "BTS Meal."

The Executive Director of UNICEF, Henrietta H. Fore, had used the phrase as well in her speech back when BTS gave their first speech at the United Nations' General Assembly in 2018 for their "LOVE MYSELF" campaign.

ARMY had taken measures by emailing HYBE and contacting the Korean Intellectual Property Office to suspend the application.

According to ARMY, if LALALEES had gained the trademark rights for "Borahae," it could pose possible brand infringements and heavily impact the term and phrase's usage in the future, in addition to the term holding a special meaning to BTS and ARMY.

YOU MIGHT BE INTERESTED IN: BTS RM Sells His Luxurious 'Hannam The Hill' Residence for 5.8 Billion Won, Sees 900 Million Won Profit

What are your thoughts on the trademark issue?