The huge one-day event is set to air on Sunday, June 19, through the Sessions - Joy Ruckus Club website.

As the first event of its kind for Sessions, the K-Pop SuperFest will feature performances from some of the largest names in the global K-pop scene including Hallyu icon Rain, powerhouse vocalist and chart-topping singer-songwriter Ailee, and Korean-American trailblazer Jessi.

They will be joined by hit boy groups AB6IX, Golden Child, and Cravity, together with girl groups Momoland and Lovelyz.

Additionally, rapper Bloo, DJ Soda, and rapper-singer Heize will be making an appearance in the Sessions - Joy Ruckus Club event. The K-Pop SuperFest will be hosted by American K-pop star AleXa and The Boyz' member Kevin. 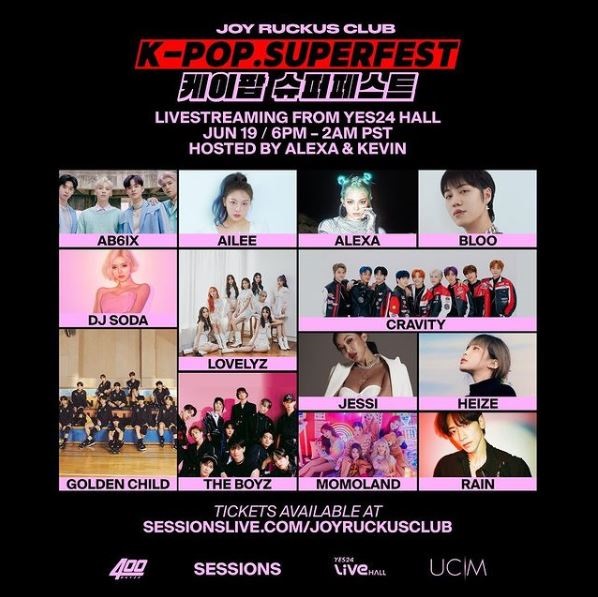 Despite being a one-day event, with the performances taking place at the world-renowned Yes24 Live Hall in Seoul, South Korea, the K-Pop SuperFest remains poised to be one of this year's largest K-pop festivals in the world.

Additionally, from its coverage and lineup alone, this team-up between Sessions and Joy Ruckus Club is undoubtedly the largest virtual K-pop festival in the Western world.

The founder of Joy Ruckus Club, Kublai Kwon, has made his name as a pioneer in the American-American music scene. From a family of musicians, Kublai is a first cousin to the South Korean singer-songwriter and record producer Shin Hae-Chul.

The late artist, known as "The Demon Lord" for his imposing stage presence, is best remembered as one of the fathers of Korean experimental rock and pop genres.

Kwon adds that through the K-Pop SuperFest, they can honor Shin's legacy by highlighting the superstars of the K-pop genre today.

"The K-Pop SuperFest represents another milestone as we bring even larger events to fans across 194 countries and 18 languages. Sessions' unique combination of gamification and marketing is driving attendance and revenue for artists at an unprecedented level, and our partnership with Kublai and Joy Ruckus Club continues to deepen."

Sessions has also unveiled a complete lineup of event merch: t-shirts, NFT videos, signed posters, and even limited opportunities for a virtual 1-on-1 meet & greet with the participating artists.