"BTS, THE BEST" - the super-septet's Japanese album - is sweeping the charts in Japan! 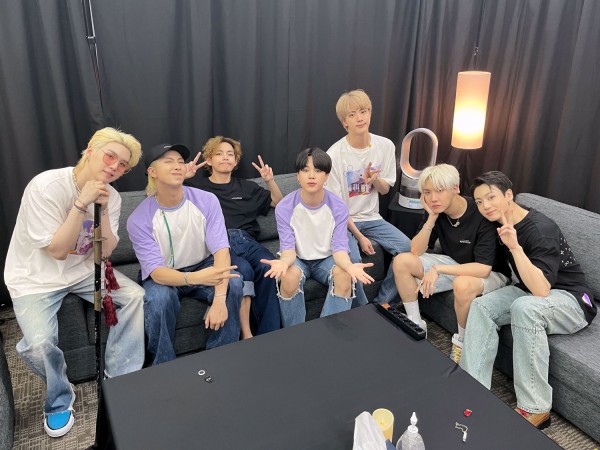 According to Oricon on June 17 KST, BTS snagged the No.1 spot on the Japanese music chart with their Japanese compilation album, "BTS, THE BEST," which was just released on June 16. In just one day after the album's release, it already rose to the ranks with almost 572,000 album copies sold on Oricon's Daily Album charts.

Based on Oricon's weekly album rankings, the act that had the highest sales volume in the first week achieved by any album this year was SixTONES' album "1ST," which had sold more than 467,000 album copies in January. BTS' "BTS, THE BEST" had surpassed this record only on its first day of release, and it is expected that their sales number will get higher as the week continues on.

Not only that, but "BTS, THE BEST" also beat their own personal record for the first week sales achieved by their previous Japanese album, "MAP OF THE SOUL: 7 ~ THE JOURNEY ~," which had a record of 564,000 album copies sold on July 27, 2020, after it was released on July 14.

"BTS, THE BEST" features 23 tracks in total, including their Japanese ballad song "Film Out," released earlier this year on April 1 and will serve as an OST for the Japanese version of the Korean drama "Signal," "Crystal Snow," and "Your Eyes Tell."

Meanwhile, BTS is sweeping the No.1 spot of Oricon not only with their "BTS, THE BEST" album, but also with their newly released digital single "Butter," that was released on May 21. "Butter" took No.1 on Oricon's weekly streaming chart as of June 21, maintaining its top spot for four consecutive weeks from its first week of release as of May 31.

On June 17 KST, Gaon had announced its weekly chart rankings for the week of June 6 to June 12, featuring BTS earning a triple crown after snagging the top spots in three of Gaon's charts.

BTS' all-English song, "Butter" took the No.1 spot on this week's Digital and Streaming charts, with 33,897,462 on its digital record. Not only that, but BTS maintained their No.1 spot on Gaon's Social Chart 2.0 - which is based on their popularity on various social media platforms such as Youtube, Tik Tok, Naver's V-Live, and more. 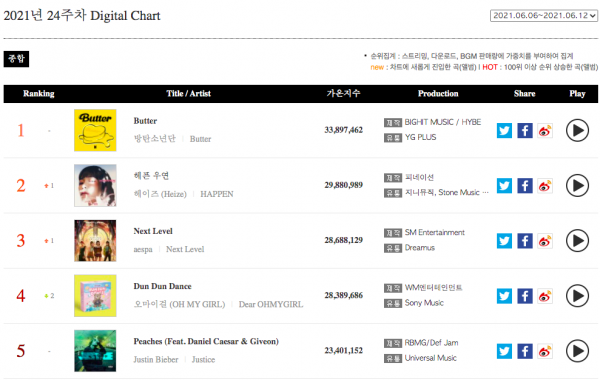 Meanwhile, BTS recently concluded their online concert in celebration of their eighth anniversary since their debut. The concert, which was held in a period of two days, had attracted more than one million people all over the world.