Just through their sneezes, you can already tell what kind of personality Mina and Momo has!

TWICE Mina and Momo's Personalities Show Through Their Sneezes - Here's How

Recently, a video of TWICE, when they were participating in an interview with U.S magazine, Cosmopolitan, is making its rounds on various social media platforms. Why? Because of TWICE members Mina and Momo!

On June 18, Cosmopolitan uploaded on their official Youtube channel a video with TWICE, where the group reacts to fashion trends. But what caught the attention of fans is the difference between Mina and Momo's sneezes!

YOU MIGHT BE INTERESTED IN: TWICE Chaeyoung, Oh My Girl YooA, and More: Korean Media Outlet Selects K-Pop Idols Who are Petite with Amazing Proportions

At around the five-minute and 35 seconds mark, Mina, who is sitting at the edge, quietly sneezes while covering her nose without the members of TWICE noticing. A few seconds later, Momo also sneezed. But there is a clear difference with hers as Momo's sneeze is loud, clear, resonant, and explosive, that even surprised the other members!

Nayeon, who was sitting to the right of Momo, was extra surprised by the Japanese member's sneeze while everyone burst into laughter. In fact, while the others were laughing, no one noticed Mina sneezing again!

Fans who saw the two members' difference in sneezes also had them laughing - others even called Momo's sneeze an "earthquake." But with this, you can also tell the kind of personalities Mina and Momo has.

IN CASE YOU MISSED IT: TWICE Ties with EXO as K-pop Groups with Most 'M Countdown' Wins + See Top 10 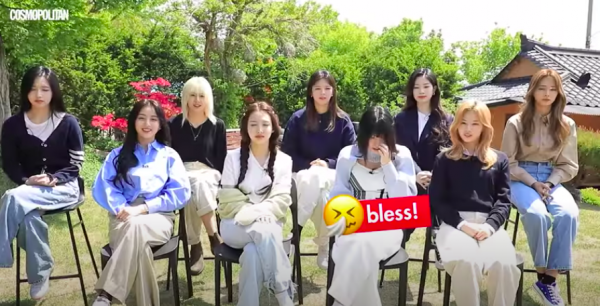 Momo's sneeze tells people that she is a lively, carefree, and relaxed person. In addition, she can also be a little troublemaker who does not mind what others think. Hence, she didn't mind sneezing "explosively" in front of the camera. Whereas Mina's sneeze tells people that she is an introverted person who is calm, gentle, quiet, and can be quite sensitive at times.

Fans commented about the two's personality differences. "It's funny that they show their personalities just through the way they sneeze," "There are two kinds of people in this world: People who sneeze like Momo, and people who sneeze like Mina," "Mina is calm and somewhat timid, while Momo is optimistic and noisy," were some of the comments fans said.

IN CASE YOU MISSED IT: TWICE, Bolbbalgan4, and More: These are the Most Streamed Songs by Girl Groups on MelOn

Meanwhile, TWICE returned with their 10th extended play, "Taste of Love," last June 11, 2021. The album consists of six tracks - all summer-themed and features a variety of genres such as hip-hop and bossa nova. Included in the album is the title track "Alcohol-Free," "First Time," "Scandal," "Conversation," "Baby Blue Love," and "SOS."