MelOn is South Korea's largest music streaming service and is the most used application by South Koreans, where they can stream and download music - similar to Spotify. MelOn has been around for almost 17 years, and since its launch, there has been a considerable amount of increase in its streams thanks to the rise of Hallyu and K-Pop. In its 17 years of being live, these are the most streamed songs by girl groups in MelOn history! 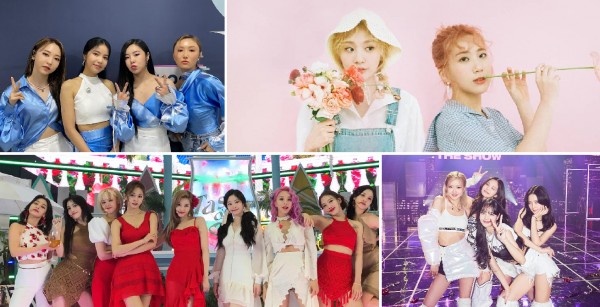 TWICE's "Cheer Up" No. 1 on Most Streamed Songs by Girl Groups on MelOn

Coming in as the No. 1 on the list of most streamed songs by a girl group in MelOn history is none other than "Cheer Up" by TWICE with more than 270,000,000 streams accumulated!

"Cheer Up" was released back on April 25, 2016, as part of the group's second extended play album "Page Two," which features the song as its lead single.

"Cheer Up" became a commercial hit, topping numerous music charts both domestic and international such as the Gaon Digital Chart for three non-consecutive weeks and debuting at No.3 on Billboard's World Digital Songs Sales.

"Cheer Up" is of the dance-pop genre that incorporates multiple other genres such as a tropical house, hip-hop, and drum and bass. It also gave birth to the popular "shy shy shy" phrase that overtook Korea.

Bolbbalgan4's "Galaxy" No. 2 on Most Streamed Songs by a Girl Group on MelOn

Following behind TWICE as the second on the rankings of most streamed songs by a girl group is Bolbbalgan4's "Galaxy"! As of June 16, the song currently has more than 234,500,000 streams accumulated. "Galaxy" was released on August 29, 2016, as part of their first studio album "Red Planet."

"Galaxy," which is a mix of the pop and rock genres, dominated the music charts after its release. It peaked at No.2 on Gaon Digital Chart and at No.36 on Billboard's K-Pop Hot 100. The song also won Best Indie at the 2016 MelOn Music Awards and Song of the Year at the 2017 Korean Music Awards.

Bolbbalgan4, sometimes shortened to Bol4, made its debut with "Fight Day" in April 2016. The group originally consisted of duo Ahn Ji Young and Woo Ji Yoon. In 2020, Woo Ji Yoon departed from the group, and Ahn Ji Young will continue promoting as Bolbbalgan4.

These are the Top 20 Most Streamed Songs by a Girl Group in MelOn History: