On June 27, KST, British singer-songwriter Ed Sheeran took part in an interview with "Most Requested Live," an American radio show to talk about his newly released single "Bad Habits," which was released on June 26 local time.

During the interview, Ed Sheeran revealed that he had worked on a new song with BTS! 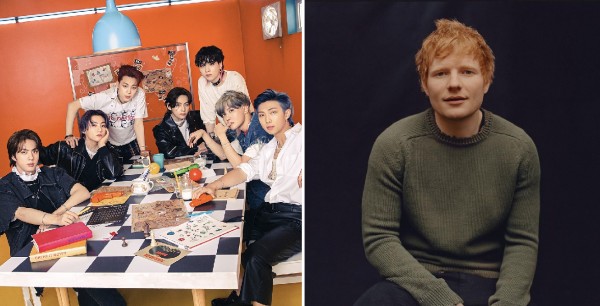 Ed Sheeran Confirmed to Be Participating in BTS' Upcoming Song

Ed Sheeran says that he had worked with BTS on their last record and that he once again worked with the superstars by writing a song for their new record. "And they're like super, super cool guys as well," added Ed Sheeran.

Later in the day, BTS' label, Big Hit Music, made an official statement to Newsen regarding the participation of the British singer, "It is true that Ed Sheeran is participating in BTS' new song."

However, it is not clear whether the collaboration song of the two popular musicians will be included in BTS' upcoming single CD "Butter," which is set to be released on July 9. There is, however, a possibility that the collaboration song will be included in a new album that is set to be released at a later date rather than the upcoming single CD.

When Big Hit Music was asked if the collaboration song will be released this coming July, the label said, "It is difficult to confirm the details."

The collaboration song between the two will be the first one they had in two years since Ed Sheeran first participated in "Make It Right," a song included in BTS' album "MAP OF THE SOUL: PERSONA" that was released back in April 2019.

In a past press conference to commemorate the release of "MAP OF THE SOUL: PERSONA," BTS revealed that Ed Sheeran had contacted the group first for a collaboration and that they had gladly accepted it.

Ed Sheeran has been consistently showing his interest in BTS' music for the past four years. At the time when BTS released their album "LOVE YOURSELF 結 'Answer'" back in August 2018, Ed Sheeran had posted on his official social media account a congratulations to BTS, saying, "Congrats to BTS who are about to have an incredible week. Cool album."

IN CASE YOU MISSED IT: Vietnamese Singers Under Fire for Plagiarizing BTS' 'Life Goes On'

In another interview in 2018, Ed Sheeran had revealed that he wrote a song that he can collaborate with BTS, as he really liked BTS and think they are cool.

As Ed Sheeran revealed his second collaboration with the group, fans around the world are anticipating the new song and have high expectations after the success of "Make It Right."

Are you excited about their upcoming collaboration song?