The 2021 K-Pop Superfest, "New Beginnings," is presented by Joy Ruckus Club, the largest global Asian music festival, in partnership with LiveXLive Media, a global live streaming platform, as they treat fans to exciting performances by popular and rising K-Pop groups and solo artists, such as DONGKIZ, pH-1, San E, Kaachi, W24, and many more!

On August 27 at 6pm PDT, Joy Ruckus Club presented "New Beginnings" with K-Pop Superfest, with performances by the K-Pop artists being pre-recorded in South Korea. Kaachi member Coco and DONGKIZ's Jonghyeong acted as the hosts for the special music festival. 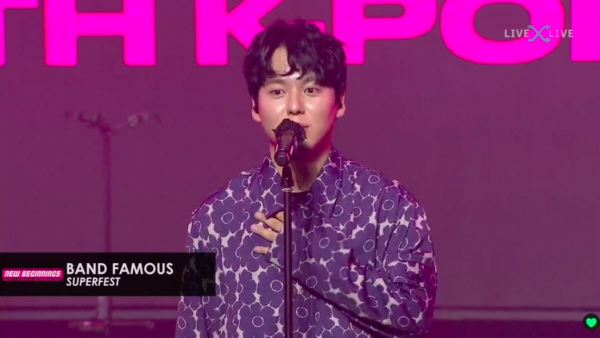 To kickstart the K-Pop Superfest, indie band Band Famous performed three of their best groovy tracks to set the mood for the festivity.

Performing next is indie solo artist, Woo Jee Won, who captivated fans with her charming and dreamy voice, as well as a cheerful performance. Woo Jee Won performed three of her songs, including her most recent track, "Heroine." 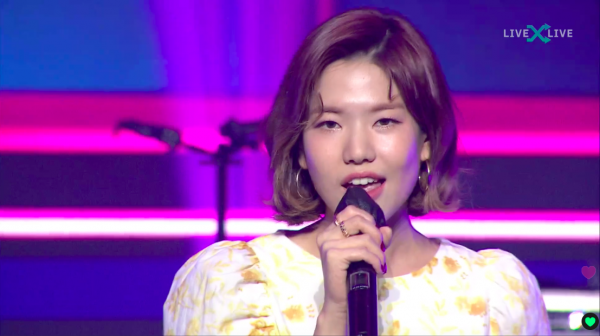 After Woo Jee Won, fans were given a special rock performance by famous guitarist Kim Se Hwang, former member of rock bands N.EX.T, Downtown, NovaSonic, and 2Cell, who stunned fans with his amazing guitar solos and riffs, alongside his live band. He also performed his popular song, "Love Story."

Before Kim Se Hwang handed over the stage to W24, he and the four band members had a little chat on stage, talking about their musical and production process, as well as greeting and thanking fans in Spanish. 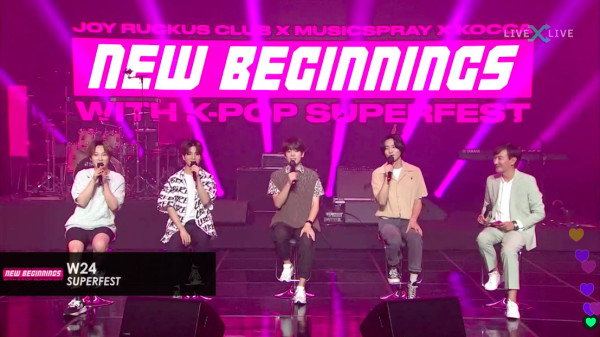 After that, W24 performed some of their most popular songs, including "Solfamiredo," "Everything is Fine," and "Lonely Twist," which gave an exciting retro-vibe, with solos from Jonggil on the drums, Aaron on the keyboard, and Yunsoo on the guitar. 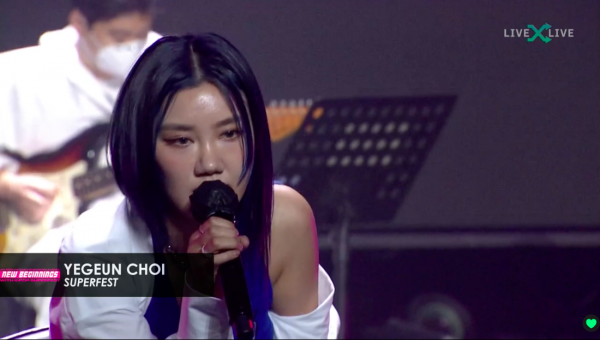 Coming in as the fifth performer is Choi Ye Geun, with her live band geared up in PPE suits. The former "K-Pop Star" contestant gave off a charismatic performance with five songs, including her dreamy song "Lucid Dream," "Unbalance," and her recently released song "Better Rush," that features Huckleberry P.

Hosts Coco and Jonghyeong went back up on stage to introduce the next performers, who are none other than Jonghyeong's fellow members and group, DONGKIZ! 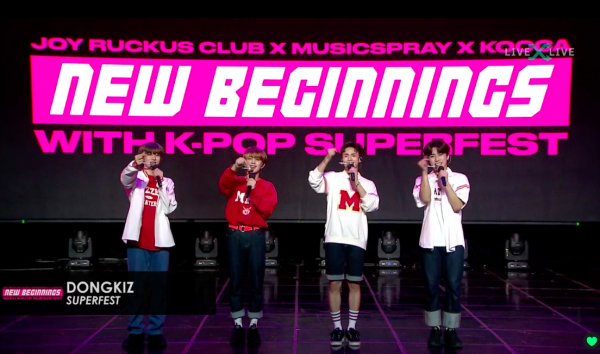 Donned in a black and white outfit, DONGKIZ performed their song, "Lupin," as four members. Unfortunately, DONGKIZ member, Wondae, wasn't able to perform due to a shoulder injury. With a quick outfit change, the group also performed their songs "Fever" and "Crazy Night," exciting many fans with the songs' beats and vibe.

Taking center stage as seventh performer of the night is British pop girl group, Kaachi, who definitely livened up the fans with their colorful appearance. They performed a total of four songs, starting off with "Your Turn," and followed by a dance break to "Photo Magic." 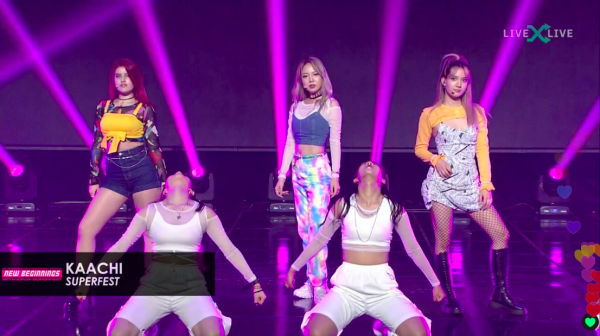 Before Kaachi moved on to their third song, they shared with fans their experiences with K-Pop in the United Kingdom, sharing how not a lot of people knew about K-Pop and they would get judged for it in the past. But now, K-Pop has taken over the world!

Performing their third song for the first time, Kaachi reveals their song is called "Extra Special," which talks about just how special every single one of us are and that we should love ourselves the way we are. The group ends the stage with "Get Up." 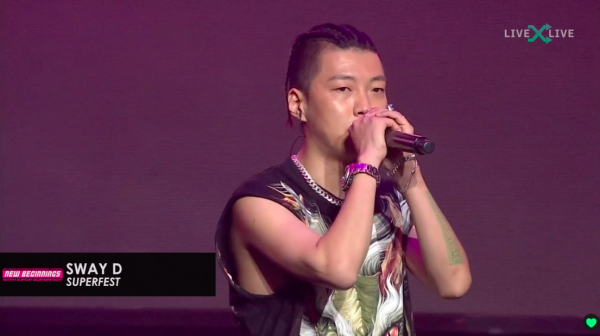 Moving onto the hip-hop side, Sway D performs six of his tracks, including "Sway D Mobile," "Air," and "Break Bread."

H1GHR Music's very own pH-1 also excited fans with his performance of seven songs. Being a fan-favorite, pH-1 gave a live performance of his addicting songs such as, "Homebody," "Cupid," "Like Me," "PACKITUP!," "Achoo," "365&7," and "Different Summer." 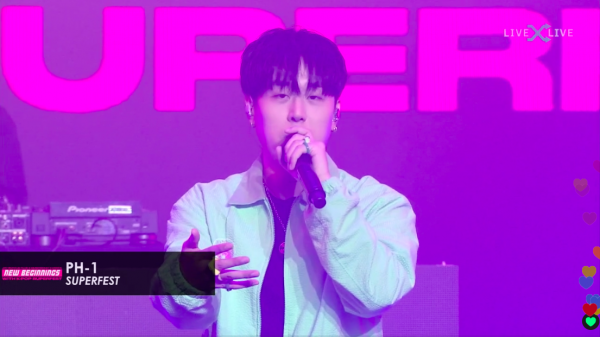 Rising hip-hop artist, BE'O from Fameus Entertainment also performed five of his top songs, including "Puppy Love," which features San E who made an appearance on his performance stage.

YOU MIGHT BE INTERESTED IN: 35 Music Critics & Professionals Select Melon's Top 100 K-pop Masterpieces -Find Out Which Song is the Most Legendary 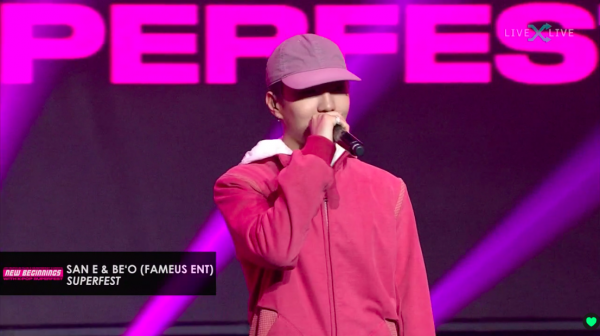 Capping off the K-Pop Superfest as the eleventh and last performer is San E with his energetic performance of six songs, which included his sweet collaboration song with Baek Yerin, "Me You," his 2009 song, "Rap Genius," and "Mohae."

Despite the music festival having no live audience when he recorded his performances, San E still made the livestream's audiences feel like they were a part of the show, with San E "handing" the microphone to the audience to hear them "scream." 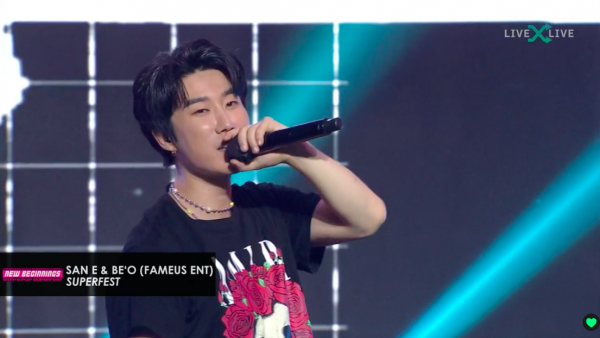 Meanwhile, the second day of the 2021 K-Pop Superfest presented by Joy Ruckus Club, which will feature performances by Everglow, KARD, Majors, ONF, AleXa, Yubin, A.C.E, cignature, MCND, and Yours, will be held on August 28 at 8pm PDT.