Just a few days before launch, ASTRO once again captures the attention and imagination of fans with "ALIVE Official Music Video TEASER (TAKE OFF ver)." 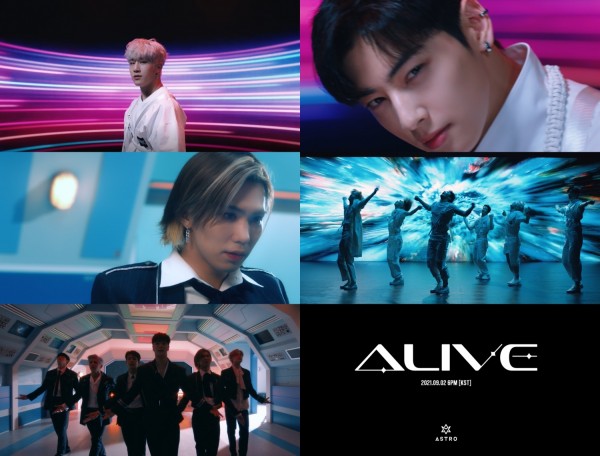 In the teaser, ASTRO members JinJin, MJ, Cha Eunwoo, Moonbin, Rocky and Sanha are seen running out in a hurry after a warning signal went off in their spaceship. The audience is given hints about the upcoming growth of the Space Air Force cadets in the video, saving a spaceship from an accident and reaching their destination at lightspeed.

More importantly, fans have been treated to a sample of the choreography that will appear once the official music video for "ALIVE" has been released, catching their attention and leaving them wanting for more. For a quick moment, ASTRO also raised curiosity among fans by showing charismatic and synchronized movements paired with the members' piercing eyes that stand out in the colorful neon lights.

ASTRO is a six-member boy group formed by Fantagio, making their debut with the EP "Spring Up." Shortly after their debut, they were named as one of the K-pop groups by Billboard in the same year.

Since then, they have released two studio albums and a total of eight EPs, the latest of which is "Switch On," released last August 2. Their latest album contains six songs including the lead track "After Midnight." The eighth ASTRO EP managed to top the South Korean Gaon album charts as well as reach the second spot in the Japanese Oricon albums chart.

Meanwhile, "ALIVE" is set to be released on various music streaming sites on September 2, 6 PM KST. The full version of music video will be released exclusively via the UNIVERSE app.