On the midnight of September 10, YG Entertainment and BLACKPINK's official SNS published Lisa's theatrical poster saying "LALISA: D-Day" along with the date and time of the single's release.

The image highlights Lisa sporting a sparkly, gold outfit while lying in the water. Aside from that, climactic red lighting gives an elegance to the poster. 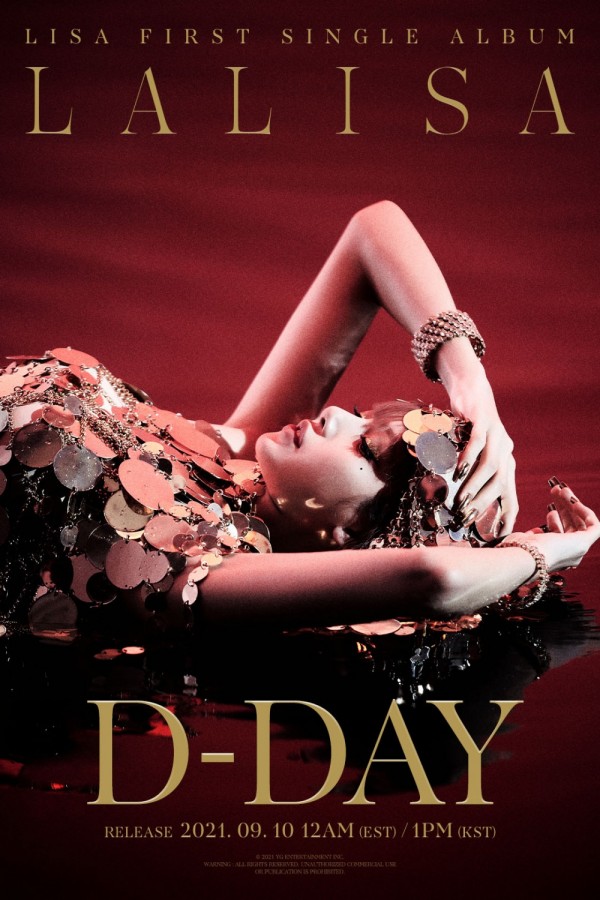 With the combination of strong hip-hop sound, charismatic rapping, and spectacular performance that best represents her, Lisa's unique musical identity has been revived.

YG Entertainment, her agency, says that Lisa's title track "LALISA" is a song that combines with an alluring brass riff that reminds of a siren and dynamic rhythm. The tense auditory elements are meeting Lisa's powerful and dynamic rap that creates an explosive synergy.

However, if the title song focused just on Lisa's original appearance, the b-side song "MONEY" is a song that will double her splendor. It highlights Lisa's swag-filled lyrics on a hip-hop song that is sophisticated. Both tracks are anticipated to be loved by music fans all over the world because it is created with the strongest music producers.

Lisa cooperated in all the phases of the album production, along with music video choreography, cover design, and styling. Just like herself in the track, Lisa also hid a remarkable message to everyone that wants to live a life of love for themselves. This is a point where Lisa's rediscovery as a solo artist gains attention.

Lisa's solo album has a total of four tracks, among them are the title songs "LALISA" and "MONEY."

BLINKs worldwide are also excited because Lisa is now recognized as the world's top performer.

YOU MIGHT LIKE TO READ: BLACKPINK Lisa to Perform 'LALISA' for the First Time on 'The Tonight Show with Jimmy Fallon'

The album is now expected to hold the highest record ever for a K-Pop female solo artist. Also, becoming a million-seller should also be expected soon.

As Lisa's solo debut is approaching only hours away, fans worldwide are expressing their excitement to Twitter showing love and support for the BLACKPINK rapper. They started a trend saying "#TodayIsLalisaDay" and it is already on top of worldwide trends.

Prior to the single's release, Lisa will meet her fans through "Countdown Live," a broadcast which simultaneously airs through Naver V LIVE and TikTok an hour before "LALISA" will dominate the world once again.

And then, she will perform her first solo stage on "The Tonight Show Starring Jimmy Fallon," an American talk show by NBC.