Do you have the same taste as these idols? Read more to find out! 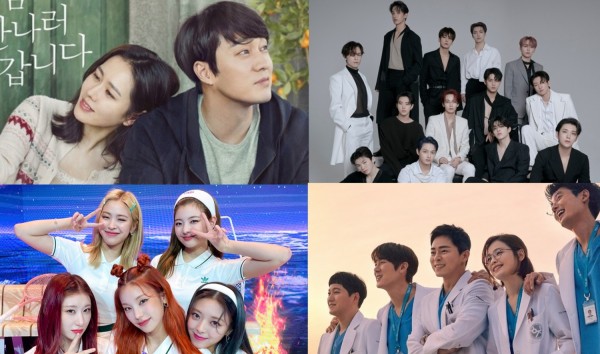 On September 17, Ilgan Sports released an article comprising of K-pop idols' movie and drama recommendations for people to stream this coming Chuseok.

In particular, Chuseok is a Korean holiday where families gather together for thanksgiving.

As the coronavirus pandemic limits the holiday as a "stay-cation," the Korean media outlet asked numerous K-pop idols about their favorite movies or dramas that they suggest people watch as well.

Here Are the Movies and Dramas You Can Watch During Chuseok, Suggested by K-pop Idols

Recommended by SHINee Key, the male idol emphasized that it is a great movie to watch together with family.

He said, "Watching old movies together will also create a warm atmosphere during the holidays."

If you want to ponder about life, then this will also suit you.

The film was suggested by WINNER Kang Seung Yoon and Song Minho, highlighting, "It's a warm and healing movie where you can feel nature and relax throughout the movie. I hope you get healing while resting during Chuseok.”

Mingyu of SEVENTEEN, who suggested "Spiderman," noted that the film is a good way to reminisce one's childhood.

Meanwhile, Dino who selected "Extreme Job" pointed out that it is a movie that can give you a good laugh along with family.

He added, "There are so many interesting scenes and famous lines that you can't stop laughing until the end of the movie."

The musical duo, AKMU, specifically recommended a movie that their family watch together. The biological siblings Chan Hyuk and Suhyun also revealed that the movie is actually the inspiration of their second EP "Next Episode" – the more reason you should watch it!

Approved by ITZY, Lia chose "Heart Is..." because it is a movie that families can watch together.

Ryujin then suggested "Will You Be There?" with the thought of, "I think it would be good to spend Chuseok with your family while enjoying the calm flow(of the movie), it is not too light or heavy ."

ALSO READ: Choose Your Favorite: EXO Movies and K-Dramas That You Can Watch While in Quarantine

iKON attested that this movie will bring people a brilliant holiday. They said, "What else do we need to explain about actor Ryoo Seung Beom's acting and director Ryoo Seung Wan's work?"

According to TREASURE, "The Descendants" is a movie that you can watch if you want to heal, while "Be With You" is a film that will make you feel the importance of love and family.

TREASURE added, "'Real Steel' is a movie that conveys a touching feeling throughout the movie! I think it would be good to have a touching Chuseok.”

"Boss Baby" is a film recommended by DAY6 Young K for the reason that he wants to share the fun of this light movie suited for all ages.

This drama is a suggestion from ASTRO Sanha, saying, "The drama I want to recommend is Hospital Playlist. It's been aired until season 2, and the actors' chemistry is really good, and I'm curious about the behind-the-scenes story, so I keep watching it. I hope you watch it once."

Recommended by JANNABI, the four-member indie rock band selected the movie as it is perfect for the family.

They noted, "We think there were many things to talk about after watching it."

So, which idol has the same taste as you? Which drama or film are you going to watch this coming Chuseok?