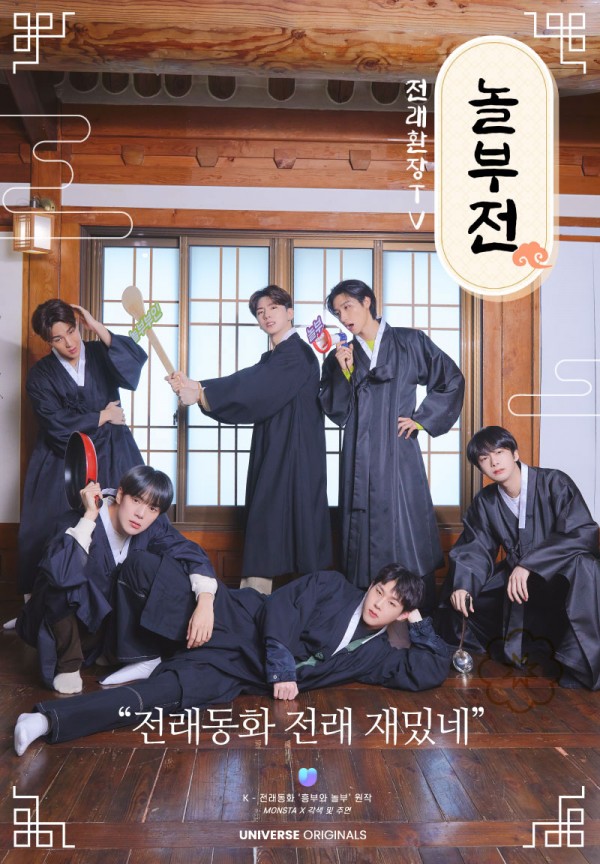 Universe Shortform Variety Traditional TV Nolbujeon is a new web entertainment show in which MONSTA X completes a new concept of K-traditional fairy tale through an episode-specific challenge in a fairy tale. The final winner of the game will directly assign an unconventional role to provide unexpected fun.

The pre-released video released on the same day showed MONSTA X participating in the game to assign the role of "Shinnolbujeon." First of all, I.M. started a unique game where he hugged Kihyun and wrapped himself around him. I.M., who was playing the game in a stable posture, quickly lost his strength due to his high-level movements and threw Kihyun away, making the scene a sea of laughter.

The members then selected Nolbu, the powerful man, as the final winner of the wrap-up game. Shownu responded with a reaction beyond imagination to be good to Nolbu, the "best power," and the members who were watching were depicted laughing. The main series will be unveiled from the 27th on what roles each member of MONSTA X will play.

Universe Original Crazy TV Nolbujeon offers a glimpse of MONSTA X's fierce and agile game to become Nolbu, the powerful man, as well as the chemistry between the members through role assignment. Expectations are high on what kind of charm the versatile MONSTA X will show in this new concept of Nolbu match.

Meanwhile, Universe's new short form variety TV "Nolbujeon" will be released every Wednesday at 10 a.m. starting with the release of the first episode of the main episode on the 27th. It consists of the 8th episode of the main series, the 1st behind-the-scenes episode, and the 1st full version.