After BTS capped off their successful online concert, fans have noticed that some of the members wore shoes that were too big on them and have criticized the group's stylists.

Back on October 24, BTS held their highly successful first online concert for the year with "Permission To Dance On Stage," where the seven-member group performed a total of 24 songs, including their hit tracks "Fire," "Dope," "DNA," "ON," and many more. The concert lasted for around two hours, with millions of fans around the world in attendance.

Days after the online concert, however, BTS fans had discovered that the some of the members were wearing shoes that were two to three sizes too big on them while they were performing.

In particular, in screenshots taken by fans, members Jin and J-Hope can be seen wearing oversized shoes with visibly huge gaps as they sing and dance on stage to their songs "Dynamite," "Butter," "Boy With Luv," and "Life Goes On." 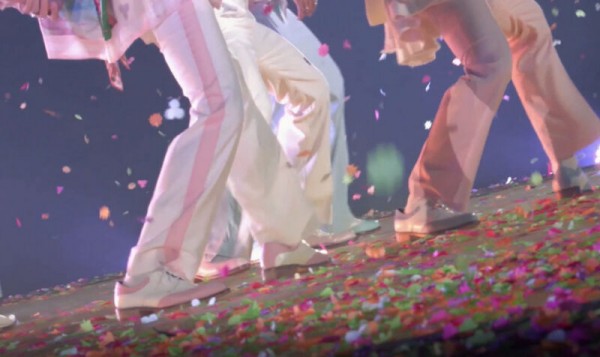 Seeing this, fans took to their social media and online communities to share their worries with the members wearing oversized shoes, especially as this can be dangerous for them as their perform on stage while dancing.

In turn, fans have begun criticizing BTS' stylists for such a decision. Many have left comments such as "I can't believe that their stylists gave them such big shoes. They have to dance in them, you know," and "It is really dangerous for them to be dancing in those big shoes. Please provide them with the correct shoe size for the safety of the members!"

IN CASE YOU MISSED IT: 'HYBE RESPECT JIMIN' - Label Slammed for Using Derogatory Word Against BTS Member in Video

Fans have also pointed out that this was not the first time such an incident happened. In the past, they would witness the members wearing shoes too big for them for their music video shootings, performances, and more.

As such, fans have called out BTS' music label, HYBE Labels, and demanded that they take better care of their artists.

Meanwhile, one of BTS' latest hit tracks, "Butter," has been included in the list of nominations for this year's Best Pop Duo/Group at the 2022 GRAMMY Awards.

This means that "Butter" will be going up against Doja Cat and SZA's "Kiss Me More," 24kGoldn and Iann Dior's "Mood," Lizzo and Cardi B's "Rumors," and The Kid LAROI and Miley Cyrus' "Without You."