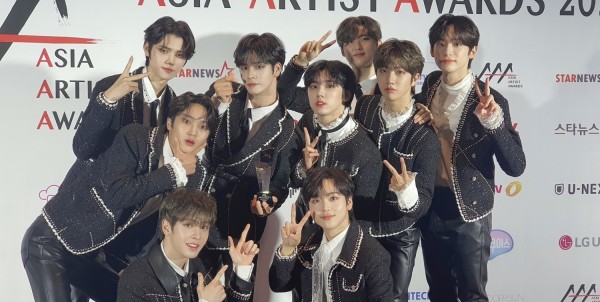 Upon receiving this award, CRAVITY expressed their thanks. "We're just so happy to be able to make a debut and perform like this, and we're so grateful for this meaningful award." They also shared their gratitude 'to all the staff members and the agency's family for always making Cravity shine."

CRAVITY also cited LUVITY, their official fanbase, for giving them "great strength and love," telling them, "Thank you so much, and I love you. We will always work hard with good performances and performances."

For their fans across the world, Allen spoke on behalf of the group and shared their acceptance speech in English. "I'm thrilled to have this honor. I ask for your love and support, and I will continue to work harder."

"Thank you to the LUVITY around the world for giving me this honor," Allen added.

During their 2020 AAA performance, Cravity performed with a star-filled digital background, with a comet signaling the start of their performance of their debut single "Break All The Rules." With a black and white motif for their costume, all nine members displayed their raw vocal prowess with the song, with their energy and timing highlighted in a dance solo near the end.

The nine-member South Korean boy group was formed by Starship Entertainment and officially debuted on Apr. 14 with their EP "Season1. Hideout: Remember Who We Are." Distributed by LOEN Entertainment, the EP was a commercial success, moving more than 150,000 physical copies in South Korea alone by July 2020, managing to reach the Gaon Album Charts' top.

The EP's title track, "Break All the Rules," was also a success, entering the Gaon Download Chart for the week dated Apr. 12 - 18, 2020. The official music video for "Break All The Rules," released on the day of their debut, now has more than 13.5 million views.

As the next hot thing on the global K-Pop scene, Cravity soon won the "New Artist Award" at the 2020 Soribada Awards on Aug. 13. More than a week later, on Aug. 24, the group released their second EP, "Season 2. Hideout: The New Day We Step Into."