Japanese singer and actress YUKIKA, who has earned fame as a K-pop artist, will be sharing stories and serenading her fans around the world in the next Amazer "History Live." 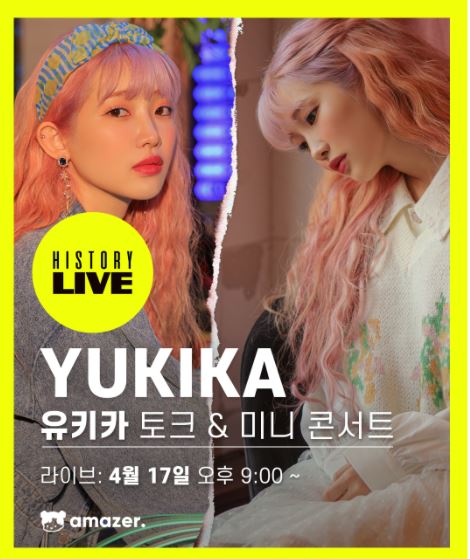 In her "History Live" performance, the latest installment in the Amazer online concert series, she will be sharing her life story and her journey as a musical artist. Additionally, YUKIKA will also offer her insights and ideas in the concept, aesthetics, and content that will be used in the episodes that will be detailing the significant chapters in her life.

Through the "History Live" event, artists are given the special opportunity to look back at their past and share important lessons and previously unreleased stories that helped shape them into who they are today. Additionally, through the past, the artist can better articulate and share their future plans with their respective fan bases.

YUKIKA will be meeting with her fans on April 17, 9 PM KST. Through the Amazer K-pop fan app, fans can enjoy the intimate experience through its Amazer Live, which is rapidly emerging as a virtual hangout of the youth, especially those interested in watching K-Pop performances. The K-pop fan app breaks down the limitations of conventional platforms where fans merely watch their idols perform. With Amazer Live, both fans and artists can better enjoy the more intimate activity with real-time interactive quizzes, digital placards, and customizable avatars audiences can use.

Tickets for the upcoming YUKIKA "History Live" can be purchased through the Amazer app - available on the Google Play Store and the Apple App Store - as well as on the Interpark Ticket site. For Interpark, ticket selling opens on April 9 at noon, Korean time. As for subscribers on the Amazer app, fans can choose from different packages, such as the VIP package that includes four exclusive photos as well as special packages that contain three voice messages from YUKIKA herself.

Born Teramoto Yukika, the 28-year-old artist first gained public attention as a member of the project girl group Real Girls Project, a ten-member group whose members appeared in the Korean spinoff of the hit The Idolmaster franchise. Yukika stood out as being the only Japanese member of the mostly Korean project group.

YUKIKA then made her solo debut in 2019 with her Korean digital single "Neon," which was also released with a physical version. As a K-Pop artist, she has established herself with her visuals as well as her musicality that mostly leans toward the city pop genre. She also released her first full studio album in 2020, "Soul Lady," which was a critical and commercial success. This album received a nomination for the Best Pop Album/ Music at the 18th Korea Popular Music Awards.

She has recently released her first mini-album, "Timeabout," last April 7, led by the single "Insomnia." Promotions for the six-track album began last March 2, with the release of the single "Lovemonth." Her latest city-pop release involves collaborations with solid K-pop hitmakers like Woong Kim, Park Moon-Chi, and CHEEZE.

RELATED ARTICLE: 8 Non-Korean K-Pop Groups and Solo Artists Who Received Either Hate or Love Upon Debut