As the release date for "GEMINI" approaches, AB6IX excites their fans even further with the second music video teaser, tagged the "Starlight Ver." 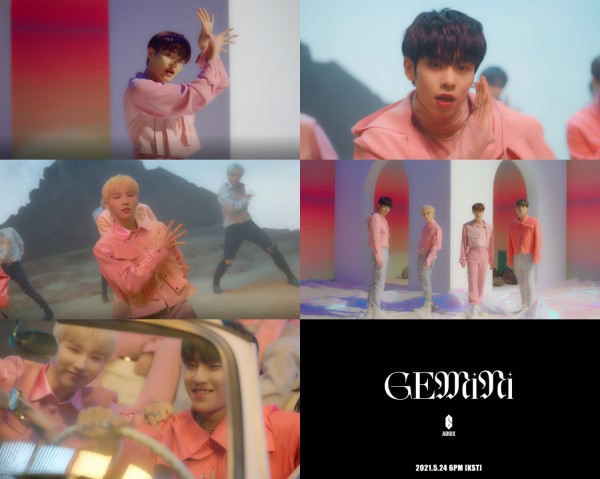 In the new 31-second music video teaser, fans are treated to more of AB6IX's upgraded visuals and stage presence. With a dreamy, softly lit background and their visuals complementing the set in each short sequence, Woong, Donghyun, Woojin, and Daehwi definitely raise the stakes ahead of their new single.

Specifically, the members' pulled off an impressive display of charm and appeal in their pink outfits, which is expected to be seen more once the music video for "GEMINI" arrives. The developers of the UNIVERSE app also shared that through the newest music video, fans will be able to see a different side to the Brand New Music boy group that they haven't shown before.

AB6IX is set to release "GEMINI," the sixth UNIVERSE Music track and the second this month after Kang Daniel's "Outerspace" (Feat. Loco), on May 24, 6 PM KST. The digital single will be available across all major music streaming platforms. Meanwhile, the music video for the AB6IX - UNIVERSE Music release will be exclusively available to users and subscribers of the UNIVERSE app.

"GEMINI" follows AB6IX's wildly successful album "Mo' Complete: Have a Dream," released last April 26. Aside from showing their beloved ABNEW how far they've come in terms of artistry and showmanship, their fourth EP broke their previous record for their highest first-week sales record. "Mo' Complete: Have a Dream" sold a total of 65,755 equivalent album sales in its debut week, which is the group's highest performance since they debuted back in 2019.