DREAMIN' and FEARLESS rejoice! Their beloved groups, DRIPPIN and Brave Girls, are the latest addition to the ever-expanding UNIVERSE.

The developers behind the rapidly-growing K-pop fan interaction platform, NCSoft and Klap, shared that they're welcoming Brave Girls, the four-piece girl group under Brave Entertainment, and DRIPPIN, the seven-member boy group under Woollim Entertainment, to the growing UNIVERSE platform. Additionally, it was proudly announced that the two groups will be participating in various content to introduce themselves across offline and online events within the app. 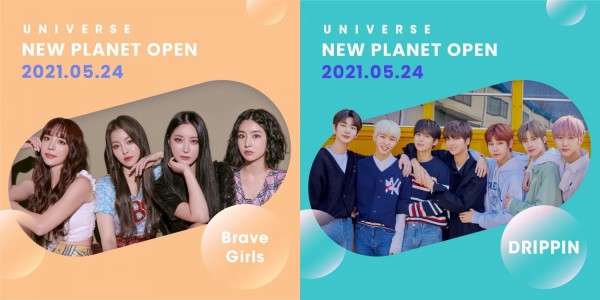 ALSO READ: Brave Girls Shares What Their 2021 Goal Is

Both groups will be starting their in-app activities to connect with their fans through the "Private Message" and "Fan Network Service," which are the main communication platforms within the UNIVERSE app - allowing both idols and fans to interact with each other and host exclusive events. Within the platform, each K-pop group has its own PLANET, which groups can share with their respective fanbases. Brave Girls is set to open its Private Messaging function by July.

Aside from performances and activities in-app, the NCSoft and Klap platform also has its original song series, UNIVERSE MUSIC, and its web series platform featuring various K-pop artists through the UNIVERSE Original.

Additionally, UNIVERSE has launched a variety of events to celebrate the two new groups joining the platform. NCSoft and Klap also announced that when the groups begin shooting their original and exclusive content, the app developers will be sending coffee trucks as a show of support. The banners that will be displayed in these coffee trucks will be determined from a Fan Network Service event, with fans participating in the event receiving exclusive Polaroid pictures of the artists.

The South Korean girl group under Brave Entertainment first made its debut with the single album "The Difference," released on April 7, 2011. The album was led by the single "Do You Know?" After a number of lineup changes, the group is currently made up of members Minyoung, Yujeong, Eunji, and Yuna.

The South Korean rookie group under Woollim Entertainment just made their debut last October 28 with the EP "Boyager." DRIPPIN is made up of seven members - Hyeop, Yunseong, Changuk, Dongyun, Minseo, Junho, and Alex - with six of them being previous participants of the Mnet survival reality show Produce X 101. They have also released their debut reality show, "We Are Drippin," on the Seezn network last September, showing the members prior to their official debut.

Their recent release, the second EP "A Better Tomorrow," was released last March 16 and reached the eighth spot on the South Korean Gaon album charts.