Arata, a Japanese dancer, choreographer, and teacher at Tokyo International School, uploaded on May 29 a video on his Youtube channel, Arata Dance School, in which he explains and analyzes the dance skills of J-Hope in BTS' "Butter" dance practice video, which BTS uploaded back on May 25.

Arata is known as an expert who does in-depth analysis on the dances of numerous K-Pop artists since 2018. In particular, he is known for calling J-Hope "daeseonsaeng," or "teacher" as a way to appreciate J-Hope's dance skills.

IN CASE YOU MISSED IT: Cosmetic Company Apologizes and Cancels Trademark Application of BTS' 'Boraehae'

Arata divided BTS' 2-minute and 51-second video into 13 sections, where he thoroughly analyzed J-Hope dance and said, "It is a performance that perfectly expresses the perfect, detailed, and love and enjoyment of dancing."

He added that he saw the technique of pulling and combining the joints at the same time, and didn't miss the beautiful silhouette formed through the technique. But with J-Hope, he added a hip-hop groove and a powerful pop that showed his technical skills. In addition, they [BTS and J-Hope] were enjoying dancing and were able to express their feelings well. "A dancer like this is extremely rare, so it was precious performance," said Arata. 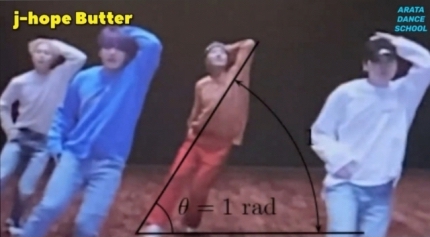 Arata also introduced some movements several times and revealed that he had learned a lot from J-Hope's dances, such as helping Arata learn how to make the action look bigger, but also do it neatly without being distracting, and also showing where to put the center of gravity while sliding to make a movement clearer.

In particular, in the 42-second mark of the "Butter" dance choreography video, J-Hope makes a "zigzag" pose. Arata shared how he tried doing the pose on his own, but said that it was generally impossible to do the zigzag pose while using the whole body to side-step, as keeping his joints in a state of pulling each other and in detail is something he can't even do. 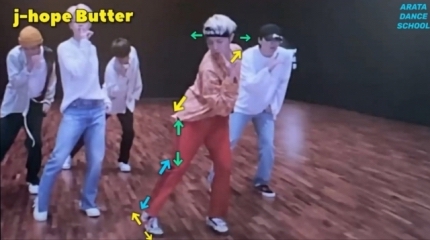 Arata says that if someone asks him about the greatness of J-Hope's dance skills, it something that cannot be seen among K-Pop artists.

Continuing with his praise for J-Hope's dance skills, he also notes the BTS member's expressiveness, such as even with a single movement of lowering his face, it instantly changes from a smiling face to a serious expression. The fine movements that he adds at the end of each movement express a mental relaxation of enjoying the moment.

Regarding the popular dance break that begins at the 1-minute and 32-second mark, which Billboard themselves have praised, Arata analyzes that the dance went beyond the usual way. Usually, J-Hope is busy expressing all the rhythms in the beginning in order to make the most in a short amount of time, but J-Hope deliberately extended the beat of the first part.

Arata ended his video by saying, "The composition of the choreography is great, but the ability of the members to catch and express the rhythm is amazing. The texture of the song, 'Butter,' was well expressed."

What are your thoughts on J-Hope dance skills?