LOONA breaks their own record for first-week album sales!

According to South Korea's largest album sales site, Hanteo Chart, on July 7, KST, LOONA's fourth mini-album "&" had recorded a total of 76,293 album copies sold in just its first week of sales, breaking the group's own record. In addition, "&" took the fourth spot as the highest-selling album in its first week that was released in 2021 by a girl group.

With the group breaking their own record for first-week album sales, LOONA is proving their growing popularity and strong fandom both domestic and overseas.

Back on June 28 at 6pm KST, LOONA made their highly-awaited comeback after two years and five months with their fourth mini-album "&," which tells the story of LOONA crossing boundaries and making a bigger change, such as breaking the typical rules and becoming one.

IN CASE YOU MISSED IT: LOONA Becomes the First Female K-pop Artist in History to Attain This Milestone on US iTunes Album Chart 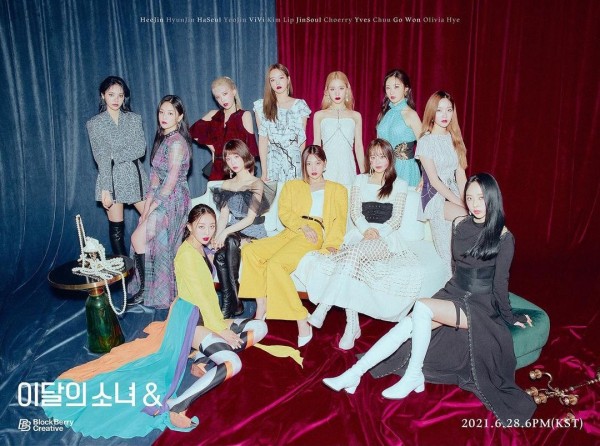 LOONA is breaking a career-high by surpassing their all-time records within just a week of their new album's release. Back on June 28, LOONA topped the iTunes Album charts in the United States, with "&" taking the No.1 spot on the chart in 36 different regions across the globe.

In fact, LOONA became the first female K-pop artist in history to have five of their albums reach the top spot on the iTunes Albums chart in the United States, after their previous albums "+ +," "X X," "#," and "12:00." This is an impressive feat considering that not many Korean acts peak at No.1, but LOONA was able to do so with five albums, proving their popularity in the United States.

In addition, "&" also took the No.1 spot on the iTunes Worldwide Albums chart for three days in a row.

Meanwhile, the group's music video for their title song "PTT (Paint The Town)" had surpassed 30 million views on Youtube in just the first week of its release. As of this writing, the music video has 32,198,134 views and more than 437,000 likes.

Check out the music video of "PTT (Paint The Town)" here:

LOONA Gears Up for Japanese Debut

In other news, LOONA is preparing to make their Japanese debut after three years since their official debut in 2018.

Back on June 27, LOONA released a special clip featuring the members at the Mori Building Digital Art Museum: teamLab Borderless that is located in Tokyo, Japan. The special clip shows the members performing 2018 single "favOriTe," as well as "Butterfly."

At the end of the special clip, LOONA announces that they will finally be making their official Japanese debut on September 15, 2021, under Universal Music Japan.

Are you excited for LOONA's Japanese debut?

Check out the special clip here: