As a limited release, the SMART + BTS Special Edition Prepaid Kit comes with an exclusive poster ABSOLUTELY FREE, plus Php 400 worth of Prepaid Load, and a SIM pack that contains 9 GB of FREE data to cover every connectivity need in today's world - watch BTS music videos, stream their latest hit "Permission to Dance" on any music streaming platform, or share their positive messages across social media sites. 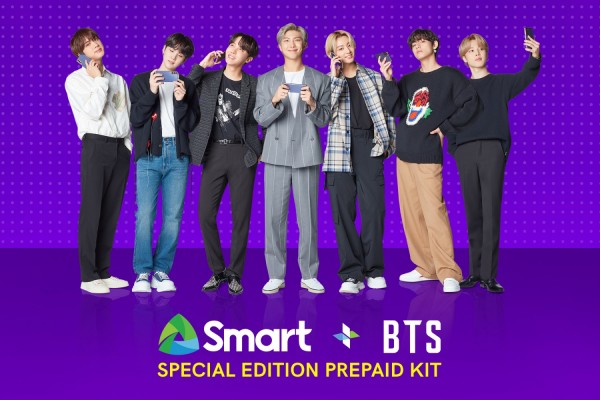 The "event promo of the year" will be available starting August 24 through the Smart Online Stores as well as the Smart Official Stores in online shopping platforms Shopee, Lazada, and Grabmart.

Fans and subscribers can also avail of the SMART + BTS Special Edition Prepaid Kit through participating Smart Stores by August 31, depending on the quarantine status.

"We've been overwhelmed by the support we received since the announcement of our groundbreaking partnership with BTS," says Jane J. Basas, SVP and Head of Consumer Wireless Business at SMART. "We're inspired by your response to our collaboration, and this is why we're always looking for ways to bring you closer to your favorite pop icons."

BTS, which stands for Bangtan Sonyeondan ("Bulletproof Boy Scouts") and is also known as "Beyond The Scene," is the GRAMMY-nominated K-pop boy group that has been one of the world's largest acts.

Since it debuted in June 2013, the group's seven members RM, Jin, Suga, J-Hope, Jimin, V, and Jungkook have gained global recognition for their authentic and self-produced music, as well as their high-octane performances.

Furthermore, they have earned the admiration and support from millions of fans, endearingly called ARMY, through their sincerity and positive messages - both in their songs and in their live appearances.

On the other hand, SMART is the Philippines' fastest 5G network for the first half of 2021, based on the latest report from Ookla, the global leader in Internet testing and analytics.

The telecommunications leader has also won the Fastest Mobile Network Award for the fourth consecutive year based on Ookla tests taken with Speedtest.

RELATED ARTICLE: TOMORROW x TOGETHER Announced as the New Ambassadors for Smart Communications