On October 12 at 2pm KST, ENHYPEN held an online showcase to commemorate the release of their first full-length album, "DIMENSION: DILEMMA." The members filled the stage with their refreshing performances, as well as talks about their album, their thoughts on being called fourth-generation icons, and more!

Talking about their new album and what it is about, ENHYPEN explained that "DIMENSION: DILEMMA" conveys the dilemma that comes from the difference between before and after they made their debut. "The troubles between an artist and an ordinary person are well contained in this album," ENHYPEN said.

In the two albums ENHYPEN previously released for their "BORDER" series, the group showcased the complex emotions they felt before their debut and the honest feelings that they felt after. With the "DIMENSION" series, ENHYPEN hopes to tell the story of boys who have entered another world after realizing that this world is of a new dimension and is more complex and contradictory. 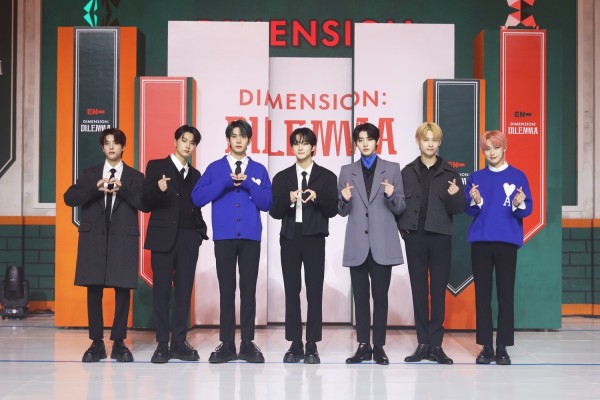 "In this album, we tried to capture the feelings and experiences that we had for over a year after our debut. At first, our goal was to make our debut, but since fans gave us a lot of love, we worked harder to show a better side to us. We tried to convey our sincere story," ENHYPEN said.

"DIMENSION: DILEMMA," which is the first album in the "DIMENSION" series, conveys the dilemma of the members' desires as begin to feel confused about their identities after entering a hyper-dimensional and multidimensional world where multiple values collide, and they cannot easily choose one.

IN CASE YOU MISSED IT: ENHYPEN Sunghoon and Jang Wonyoung Selected as New MCs for KBS 'Music Bank'

ENHYPEN on Being a Representative of Fourth Generation Idols

Less than a year since their debut, ENHYPEN has taken over the industry as monster rookies. In fact, "DIMENSION: DILEMMA" had surpassed 920,000 album copies sold, setting a new personal best for the group.

Not only that, but ENHYPEN, which started as a global fan-made group, had since then established themselves as representative fourth-generation idols with their ever-growing fanbase and success.

On being labeled as such, ENHYPEN said, "We were able to achieve good results because many people loved and supported us. It's embarrassing to call ourselves as fourth generation hot icons, but it is a driving force to show a better performance. We want to give that to fans. We want to instill confidence and prove ourselves as fourth generation icons."

Back on September 27, HYBE and CJENM announced the second season of "I-LAND" - the show which formed ENHYPEN - and their plans to debut a girl group.

Being the first group who competed and was formed through the show, ENHYPEN was asked to give advice to the show's future contestants.

"That reminds me of old memories. I still have vivid memories of 'I-LAND.' But it is important not to lose the dream and original intention of making music, and making it available to many people. I hope for the show's good results," Jay said.

Meanwhile, "DIMENSION: DILEMMA" will be released on major music platforms on October 12 at 6pm KST.