On March 9, World Music Awards announced through their official social media accounts the ranking for the "Top 10 Albums in Korea" for the tenth week of 2021.

As of the last record, SHINee who recently returned in the K-pop scene after three years atop the rankings! Following behind the group are prominent acts and artists including BTS, Wonho, Red Velvet, ONF, Taeyeon and more. 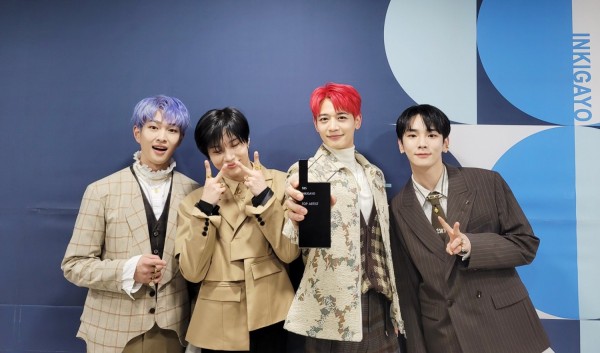 SHINee’s back! The "Princes of K-pop" proved its exceptional popularity by topping the domestic and international charts with its seventh full-length album, "Don't Call Me."

According to the World Music Awards, the K-pop group reigned as No. 1 for "Top 10 Album in Korea" after its release in February 22. Aside from this, SHINee's "Don't Call Me" also hailed as No. 1 on the Gaon Album chart in Korea, after debuting in the Worldwide iTunes Album chart at #1 for 3 consecutive days and counting.

Not only on the Gaon Chart but SHINee also placed No. 1 on Oricon Digital Album Weekly Chart. As they are winning first place in the week of the domestic album chart, this just confirmed SHINee's strong power once again. The music video for "Don't Call Me" also incredibly passed 10 million views in 34 hours after its release, boasting SHINee's unstoppable popularity both in South Korea and internationally.

Meanwhile, according to K-pop Radar for their Week 9 of 2021 data, SHINee official YouTube account received over 35 million YouTube views, with a majority of the views coming from the "Don't Call Me" music video. Among the viewers, South Korea was the biggest audience, counting for 12.5% of the views. India follows South Korea with 11.3%, Japan with 5%, Indonesia with 6.6%, and the United States with 6.2%.

You Can Also Read: SHINee Key Remembers Jonghyun in His Speech as the Group Snags 2nd Win for 'Don't Call Me'

Trailing behind SHINee, WONHO’s first mini-album PART.2 'Love Synonym #2: Right for Us' has claimed second place in the Top Album in Korea For World Music Awards.

It seems to be the result of Wonho's emotional sexy performance against the backdrop of the retro-colored heavy-sounding new song "Lose."

Wonho , who returned as a solo singer, released his first mini-album "Love Synonym #1: Right for Me" on March 4 and began his solo career with the title song "Open Mind."

Wonho's first solo album also impressively topped the World Wide iTunes Albums chart on its release especially the iTunes Top K-pop Albums chart around the world as well, this includes countries such as United States, the United Kingdom, and Canada. He also ranked second on the weekly retail album chart for the 37th week of the Gaon Chart.

Rookie groups who released their new albums such as ONF and Wei secured their spot in the top 5 as well, while prominent acts including BTS, Red Velvet and NCT Dream entered the list, despite their albums being released on the previous years.

Did your favorite K-pop music video make it to the list?