On April 2, BTS dropped their new Japanese single entitled "Film Out," which will serve as the original soundtrack for the Japanese film, "Signal." Composed by Jungkook, along with Back Number's vocalist Iyori Shimizu, the song consists of sad lyrics about a loved one.

ALSO READ: BTS is the First Korean Artist in History to be Nominated in the Brit Awards + Jimin Sings 'Fake Love', 'Zero O'Clock' with Helium

"Film Out" will be included in BTS's upcoming Japanese compilation album, titled "BTS, The Best," which will be launched on June 16.

Following its release, the song has been landing on numerous international charts, including the Billboard chart. Recently, it was revealed that "Film Out" has become BTS's first Japanese song to land on an English official singles chart, particularly the United Kingdom Official Singles Chart Top 100.

The UK Official Singles Chart Top 100 shows the bestselling singles in the United Kingdom. The rankings are based on the songs' total sales, which includes sales of downloads, vinyl, and CD, as well as audio and video streams. This English official singles chart is the UK music industry's official measure of determining how popular the song is in the country.

Recently, the latest UK Official Singles Chart Top 100 (April 9 to 15) has been revealed. And based on the chart, BTS's "Film Out" debuted at No. 73. It is the group's first-ever Japanese song to enter this certain English chart since their debut.

Apart from this chart, "Film Out" also made it to the UK Official Singles Downloads Chart Top 100. The BTS song entered the top 10, claiming the No. 6 spot. This means "Film Out" has the six-highest number of downloads in the United Kingdom for this week.

BTS's "Film Out" also successfully landed on the UK Official Singles Sales Chart Top 100. The Japanese song also secured a spot within the top 10, grabbing the No. 7 position.

BTS's "Film Out" Enters Billboard and Other International Music Charts

BTS's new Japanese release has landed on more English charts besides the UK Official Singles Chart Top 100. One of these international music charts is the Billboard Global Excl. US dated April 10. "Film Out" debuted at No. 185, setting a record for the fastest BTS song to enter the Global Excl. US chart - it took only 13 hours after its release. 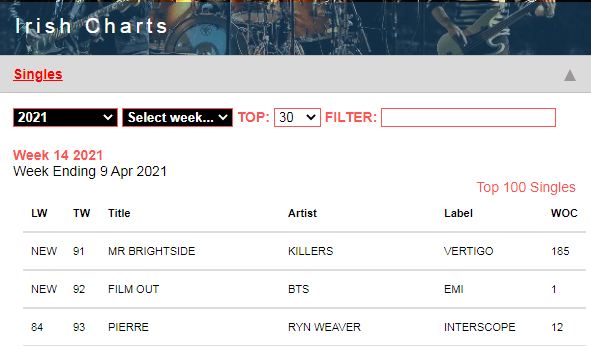 BTS's "Film Out" has also ranked 92nd on the latest IRMA chart, an Irish chart, fifth on the New Zealand's Hot 40 Singles chart, and 17th on the Hungarian "slagerlistak" Single Top 40 chart. 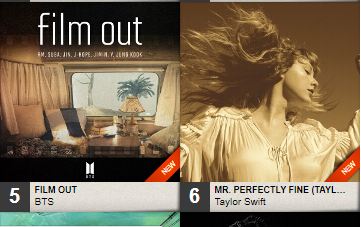 These only prove that despite the language the song was sung, BTS would always make it to music charts thanks to the constant support of fans, generally known as ARMY.

YOU MIGHT ALSO LIKE: BTS Becomes First Artist in iTunes History to Have Eight Songs Hit No. 1 in 100 Countries

Previously, "Film Out" has broken the "Dynamite" record on the Oricon Daily Digital Songs chart. The song debuted at No. 1 on the Japanese music chart with 23,344 downloads, beating "Dynamite" that had 13,985 downloads following its release. "Film Out" is now BTS's bestselling song in terms of the first-day sales on Oricon chart.