MONSTA X members Jooheon, Hyungwon, and I.M - the so-called "Producing Trio" for their work on "One of a Kind" - had a non-face-to-face interview with esteemed K-Pop columnist Jeff Benjamin for Rolling Stone magazine. 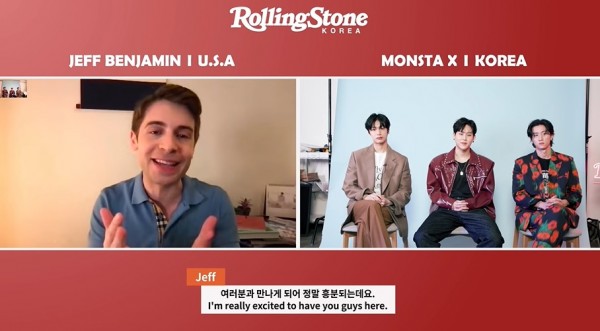 ALSO READ: Hyungwon, Jooheon, I.M Steps Up for MONSTA X Comeback 'One of a Kind'

The interview between the MONSTA X trio and Jeff Benjamin, who writes for huge global publications such as Billboard, Forbes, and Rolling Stone, was uploaded on the Rolling Stone Korea Official YouTube Channel.

From the US, Benjamin asked the Korea-based MONSTA X members what sets "One Of A Kind" from the group's previous releases.

"I think there was a difference because I know the characteristics, personality, and what part of the members should come out, and I think it had a big impact on the album," Jooheon explains.

Regarding Hyungwon's participation in the album, writing the songs "BEBE" and "SECRETS," the MONSTA X member said: "For 'BEBE,' I thought of the things that I wanted to say to our fans as I worked as a MONSTA X member for the past 6 years.

The K-Pop columnist then asked I.M about his creative process; what goes through his mind when he writes songs for MONSTA X. Humbly responding, the group maknae believes that what he does is probably the same for other songwriters, but in his case, he thinks about the members a lot.

"Also, I try to show my calm and chill side more to the public," I.M added.

Jeff Benjamin also offered his take on the title, how he appreciates "One Of A Kind" as a perfect album title for the Starship Entertainment boy group. "I think you guys are one of a kind, you know. All the different members, also MONSTA X is one of a kind."

When asked about the group's health and what they do to stay fit despite the restrictions, Jooheon showed how solid MONSTA X is as a group. He took the opportunity to recognize Shownu's contributions in making the album and provided everyone with an update on the leader's condition. He also assured that Shownu, who wasn't able to join the group in their promotional activities, is resting well and watches over everything that the group does.

As for the future plans of the group, Hyungwon first answered: "I keep trying to write songs. In the case of DJing, I think I can perform if the corona is over." Jooheon then confidently added that he's "ready at any time" since he continues to write and create songs aside from their current work on "One Of A Kind."

When asked for a message to their beloved MONBEBE, I.M answered smoothly in English. He said that while he doesn't want to sound repetitive, he said: "Seriously, I really wanna meet our fans as soon as possible and of course you, my friend," referring to Jeff Benjamin himself.

Watch the interview between Jooheon, Hyungwon, and I.M with Rolling Stone below: