A MONSTA X interview with columnist Jeff Benjamin appeared on the TIDAL magazine, as well as on the multiplatform streaming service's online and SNS sites.

Even though the group's latest album, "One Of A Kind," has finished its promotional activities, the demand for the Starship Entertainment boy group does not wane - as evidenced by their latest conversation with music columnist and K-pop writer Jeff Benjamin, a known contributor for some the world's largest publication including Forbes and Billboard. 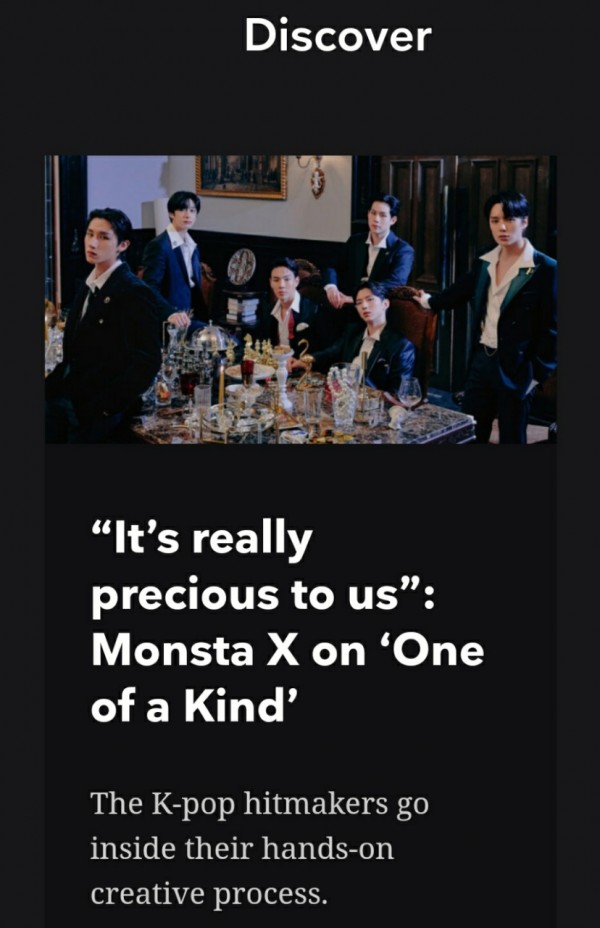 In the article titled "It's really precious to us: Monsta X on 'One of a Kind,'" the music columnist inquired to better explore how MONSTA X were more on-hands on the creative process that led to the group's ninth EP.

Benjamin noted that while members of the group have been "helping to write and co-produce tracks since their 2015 debut EP, Trespass, the K-pop boy band's latest release marks their most involved and, arguably, accomplished work to date."

He additionally noted how "One Of A Kind" represents the unique color only MONSTA X has, transcending genres and living up to its reputation. "With their latest, Monsta X are proving they aren't one of the world's top K-pop contenders by chance; instead, they are the guiding forces of a creative process that's won over their millions of fans around the world," Benjamin writes.

When asked about how they feel about the new album, Jooheon, who produced his first title track with "GAMBLER," said in his TIDAL interview that he was nervous about how fans would react.

Also, he explained that during his production process, he always took into consideration the characters of his groupmates and their voices and worked to make them confident and bring out the best in them.

"I put a lot of effort into this album. In fact, Jooheon participated in mixing and mastering, and it took a lot of time and effort," I.M shared. He has songwriting credits on the tracks in the album, particularly his and Hyungwon's work on "Secrets."

He also gave credit where due, acknowledging other members' effort that made the album feel "more special" and that the resulting work was deserving of its name.

Then, as Benjamin recognizes how each member of MONSTA X seems to feel comfortable in a particular genre, he went to Kihyun, who has been making a name for himself thanks to his string of OST performances.

When asked about its differences with performing with MONSTA X, the vocalist says that K-Drama soundtracks are a bit harder because he has to sing along, and he makes considerations that the audiences' focus stays with the series onscreen.

After the interview, Jeff Benjamin continues to heap praise on MONSTA X by writing about them on his official Twitter account. He appreciated learning more about their creative processes and hopes that more people see and recognize the group's efforts.