Minhyuk appeared as a guest on the tvN variety show "Amazing Saturday," captivating viewers both with his visuals and his quick wit.

In his recent guesting, Minhyuk appeared wearing a cute and refreshing marine outfit - captivating the bright summer atmosphere. He further sent the audience swooning when he introduced himself as a "K-Pop doctor recognized by Jaejae." The MONSTA X member adds: "If there is a boy group problem, we can answer it all. I specialize in first-generation idol groups." 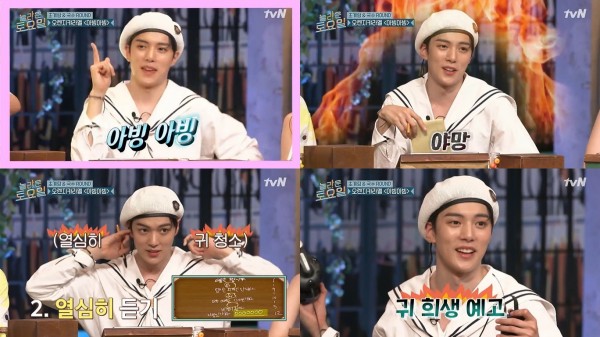 His first 'mission song' was Orange Caramel's "Abing Abing." Minhyuk started with a dense accent from the start. He was then chosen as the main character for the show's solo replace chance, earning the trust of the cast members in the process.

A staff later said, "Even if my ears turn deaf, I will still listen loudly." Minhyuk. Ever the thoughtful one, the MONSTA X member said not to do it like that. After focusing and listening to the sound at the maximum volume, Minhyuk started nodding his head and writing down the lyrics, showing focus and concentration on the task at hand. He actively tried again to guess the full lyrics even after missing his first attempt, earning praises from the staff and other guests.

In the "Amazing Saturday" snack time segment, where performers can show off their dance skills, Minhyuk gave a witty review of comedian Moon Se-yoon's dance. He said, "It was like a big octopus." When his turn came, Minhyuk captured everyone's attention with his dance cover of Block B's "NalinA."

Minhyuk's appearance on the tvN "Amazing Saturday" is the latest appearance for the vocalist and MC. He has served as MC for SBS' "Inkigayo" for a year and four months from 2019 to 2021, in addition to his hosting stints for MBC's "Weekly Idol," KBS2's "Fun-staurant," and KT Seezn's "Back to the Idol." He also currently hosts the Naver NOW Radio program "VogueShip Show."

RELATED ARTICLE: MONSTA X Minhyuk on 50th Episode of 'VogueShip Show': 'I want to continue to have fun with good people'