K-Pop supergroup OMEGA X is announced as the new face of the Korean Trade Center, set to create a promotional video for the COEX MICE Cluster (CMC), a cooperation between 13 enterprises located in Seoul. 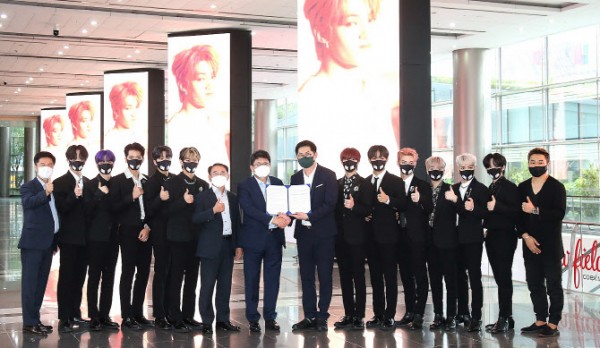 The "CMC X OMEGA X" promotional video is set for a September release and will be screened across all digital signages operated by CMC - indoor and outdoor - as well as its partner companies' social networking sites (SNS).

Last June 2021, OMEGA X made history as the first K-Pop group to appear on all digital display signages at the Starfield COEX Mall located in Gangnam-gu in Seoul, South Korea. The monster rookie group also headlined the COEX and Gangnam District public campaign, "Blossom the Hope," a festival that coincided with the opening of the COEX Urban Park.

Just last August 9, the Spire Entertainment supergroup returned to being the face of COEX digital billboards, making OMEGA X the first K-pop group to have its content featured on both the COEX and the Korean Trade Center area.

OMEGA X has been billed as a supergroup and its members monster rookies. The group was built on a concept never attempted before in the Korean entertainment industry: a group whose members are idols from previously disbanded groups and survival shows in the past. Its name, OMEGA X, is taken from the last letter of the Greek alphabet together with the letter X. A previously released statement from Spire Entertainment that the name signifies the group's goal of being the "final boss" of the industry.