UPDATE: YG Entertainment confirmed that Bobby and his fiancée have given birth to a son.

iKON Bobby and His Fiancée Welcome Their First Child

Bobby and his fiancée have officially become parents as they welcome the birth of their first child today!

According to an exclusive report by SPOTV News on September 27 KST, iKON's main rapper, Bobby, has recently become a father after his fiancée went into labor and happily welcomed the birth of their first child today. However, the report states that the gender of their child was not revealed.

Back on August 20, Bobby surprised fans by announcing through a handwritten letter on his official social media that he is getting married to a person that he loves, and that they were expecting their baby in September.

IN CASE YOU MISSED IT: iKON Bobby Reveals He Would Make a Move on BTOB's Eunkwang If He Was a Girl 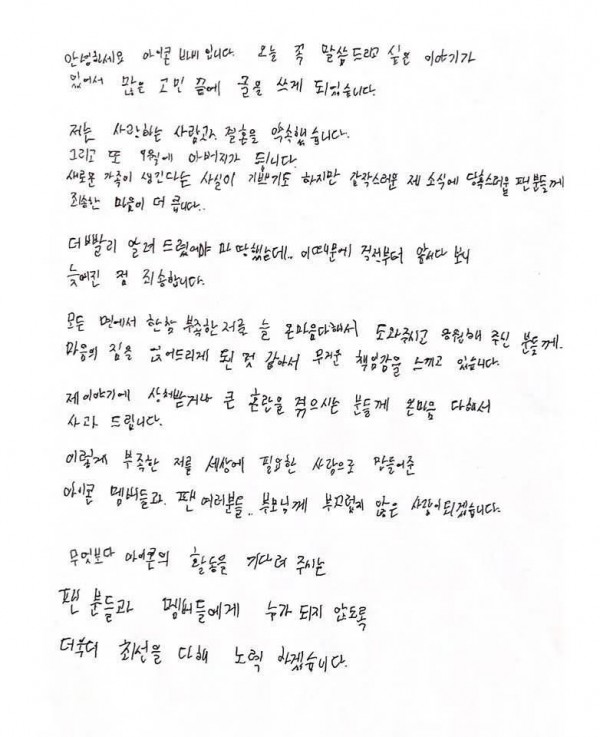 Bobby said in his letter that he had been thinking about how he would announce his marriage, and also apologized to fans for the sudden news.

"I would like to apologize with all my heart to those who have been shocked and greatly confused by my news. To my iKON members, parents, and fans, and the people who have made me the person that I am today and made me the person the world needs despite being lacking, I will work to become a person who will not bring shame to all of you, and someone who will make you proud," said Bobby in his letter.

IN CASE YOU MISSED IT: iKON Bobby Announces He Will Get Married and Become a Father

Meanwhile, fans have poured out their heartfelt congratulations for the happy couple, and have showed their utmost support for the "Love Scenario" singer.

Earlier this year, Bobby made his first comeback as a solo artist after almost four years.

Released on January 25, Bobby dropped his second studio album, "Lucky Man," that features a total of 17 tracks in which he took part in composing and writing, with his title track being "U MAD."

IN CASE YOU MISSED IT: iKON Bobby Photo Cards Put on Sale by Fans after the Idol's Announcement of His Marriage and Fatherhood

Lyrically, "U MAD" is a fierce and powerful song that mocks those who go along with opportunism and materialism, while also expressing Bobby's anger towards himself for becoming weak.

In particular, two of his fellow iKON members, DK and Ju-ne, showed their support by featuring in two of Bobby's songs, "Ur SOUL Ur BodY" and "RaiNinG," respectively.

Check out the music video for "U MAD" here:

READ ALSO: A Kid Tells iKON Bobby That Anyone Who Didn't Know 'Love Scenario' Were Losers and His Reaction Was Priceless