Lee Jin Hyuk will hold his first fan concert, LEE JIN HYUK 2021 FANCON: XYZ (hereinafter referred to as XYZ), at Jamsil Student Gymnasium in Seoul on December 24, announcing he will have a special Christmas Eve with fans around the world. 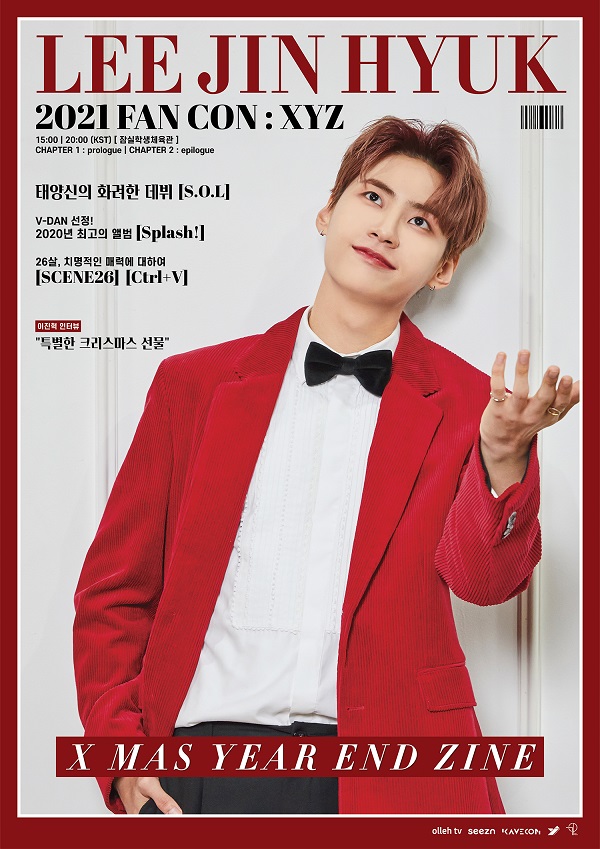 Lee Jin Hyuk's fan concert "XYZ," which means "X-MAS YEAR END ZINE," will consist of a total of two episodes of "prologue" and "epilogue," giving fans a special year-end with all the filmography from the start of Lee Jin-hyuk's solo career to the present.

Lee Jin Hyuk, who had been unable to meet fans offline since the 2019 solo fan meeting and "LEE JIN HYUK 1st SOLO ALBUM DEBUT SHOWCASE," met fans online in June by holding "LEE JIN HYUK ONTACT LIVE [SHOW26]. Fans are paying keen attention to the offline performance, which will be held for the first time in about two years.

Moreover, Lee Jin Hyuk's fan concert "XYZ" is expected to be enjoyed not only offline but also by domestic and foreign fans who cannot be with us at the concert hall through live broadcasts through Olleh TV, Season, and Cabe Con.

Lee Jin Hyuk, who has established himself as an all-around entertainer across singers, acting and entertainment, released his fourth mini-album Ctrl+V on October 18, and is busy filming E-channel entertainment show 'A Full Saturday Night', which airs at 8:50 p.m. every Saturday, and SBS drama 'Why Oh Soo-jae', scheduled to air in 2022

Meanwhile, Lee Jin Hyuk's offline performance of FANCON "XYZ," which is planning a special Christmas Eve, will be held twice at 3 p.m. and 8 p.m. on December 24, 2021, and ticket reservations will be available through YES24, and pre-booking for fan clubs will be available at 8 p.m. on November 30, 2021. General reservations will open at 6 p.m. on December 3.

Online performances can be found on Olleh TV, seezn, and KAVECON from 3 p.m. on December 10.