Brave Girls recently saw a sudden rise in popularity, thanks to their 2017-single "Rollin'," which unexpectedly climb up the Korean music charts. In particular, the song has just achieved a major milestone on MelOn 24Hits, becoming the third K-pop group to do so, following K-pop's biggest acts BTS and BLACKPINK.

Dropped on March 7, 2017, "Rollin'" by the five-member girl group Brave Girls is an upbeat EDM song with a tropical house influence. The track talks about one-sided love and goes with a sexy concept. While fans loved this song, it didn't do well on Korean music charts. Additionally, Brave Girls' album, which is also titled "Rollin,'" only sold 1,091 copies for the whole month of March.

On Feb. 27, almost four years since Brave Girls' "Rollin'" was released, it finally obtained its very first No. 1 on a Korean music chart, specifically on Bugs. Then, on March 1, it successfully entered more music charts in the country, including MelOn 24Hits.

The 24Hits is a replacement for the regular "real-time" chart of Korea's largest music streaming service, MelOn. The chart ranks songs depending on their cumulative streams instead of their real-time plays.

On March 11, Brave Girls' "Rollin'" has impressively surpassed IU's "Celebrity" on the MelOn 24Hits chart. It took approximately a month and a half since the release of IU's single on Jan. 27. In particular, Brave Girls is currently at No. 1 on the said chart as of writing. This makes them one of the only K-pop girl groups to reach the top spot on the MelOn 24Hits chart, with the other team being BLACKPINK. The YG girl group previously topped the MelOn chart with their hit song "How You Like That."

Other than that, Brave Girls is now the third K-pop group overall to do achieve this feat, following BLACKPINK and BTS. The Big Hit boy group ranked first on MelOn 24Hits with "Dynamite."

Furthermore, Brave Girls is also now the first idol group to attain a real-time all-kill this year. As of March 11 at noon KST, "Rollin'" is in first place in four charts simultaneously: MelOn, Genie, Bugs, and FLO.

To express her gratitude to the fans for the recent achievement of "Rollin'," Brave Girls Minyoung shared a screenshot of MelOn 24Hits chart with the song at No. 1 via her Instagram story. The singer wrote, "Thank you... #1 on MelOn's 24Hits... I will become more humble! Please tune in to 'M Countdown' today at 6 p.m. to watch 'Rollin''." 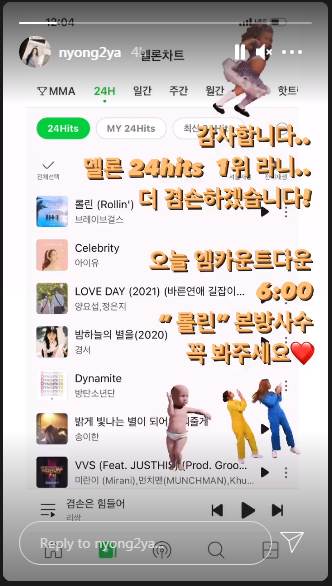 ALSO READ: Brave Girls Yujeong Reveals She Thought about Quitting a Week before the Viral 'Rollin'' Fan Edit Was Released

Because of its ongoing fame in Korea, it's no wonder Brave Girls' "Rollin'" made it to three Gaon charts this week. On the Weekly Digital Chart, the song ranked second with a total of 20,517,041 points. On the Weekly Download Chart, it took the No. 4 position, while on the streaming category, "Rollin'" rose to No. 3.