BTS appeared in a RADIO.COM interview days before their much-awaited Grammy appearance, sharing their music preferences including Silk Sonic and Ariana Grande.

Talking with Kevan Kenney for the latest "RADIO.COM Live! Check in," all seven BTS members - RM, Jin, Suga, J-Hope, Jimin, V, and Jungkook - also opened up about their plans should they win the Grammy this year, highlighting their devoted fans: the BTS Army. 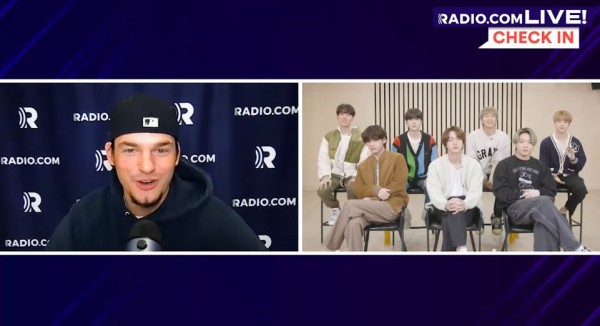 "So every time we have something important and a big event like this we meet our fans and do a live stream because our fans are who we need to thank first if there is a win," Jimin explains,

Additionally, they all agree as Jungkook shares that they have their ARMY, "they are near and far, but they are always supporting us."

As for their Grammy performance, the group explains that they can't drop "spoilers." However, RM adds that it's going to be "a blast."

Lastly, BTS also told the RADIO.COM host about their preparations for the upcoming event - that the band regularly works out and that they always listen to music. All seven of them - again in unison - shares how they loved the latest hit "Leave the Door Open," the debut single from the Anderson .Paak and Bruno Mars collaborative project Silk Sonic. Additionally, RM notes that Ariana Grande's new album, "Positions," is the best for the treadmill, noting that "the tempo and her voice, is amazing."

"Next time for sure!"

BTS is nominated for the Best Pop Duo/ Group Performance awards in the 2021 Grammys. The annual music awards event, which was held last Sunday, March 14 at 8 PM ET/ 5 PM PT, saw the global K-Pop icons fall short in their nominated category, having lost to Lady Gaga and Ariana Grande's "Rain on Me" for the award.

However, the Big Hit Entertainment boy group appeared to take the decision gracefully. In a post on the group's official Twitter account, the seven members are shown seated together in a homely set piece. The tweet, captioned "that moment," showed the members bracing for the Grammy announcement.

A little later, Suga posted a selfie on the same Twitter account with the caption "Next time for sure!" in Korean.

While the awards night was held in Los Angeles, BTS made a spectacular performance of their 2020 megahit "Dynamite" from Seoul, South Korea.

RELATED ARTICLE: BTS Honored and Proud to be Part of 2021 GRAMMY Awards Despite Loss + Vows to Return with Better Music