NCSoft and Klap released individual and group concept photos across its official social networking sites. The individual photos showed its members - Miyeon, Minnie, Soyeon, Yuqi, and Shuhua - each dressed in black outfits and their heads adorned with ornate, white crowns. They are also shown seated with fruits and candles on the table, giving a regal yet mysterious appeal.

The group photo shows all five members - queen-like in their beauty - standing over the table filled with candles, plants, and more curiously, a skull. 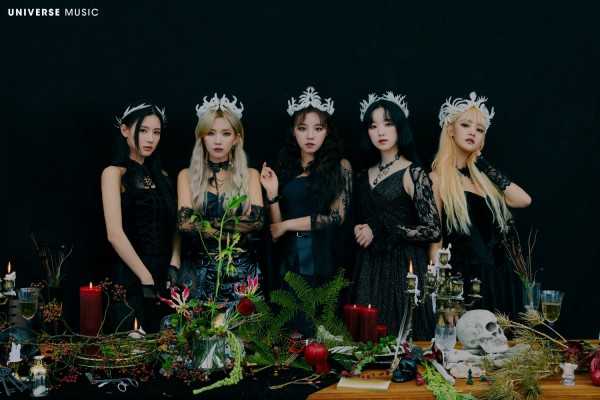 The concept photos drew wide attention across the different SNS platforms, owing to the darker and more mature concept. Their unique concept, paired with the stunning visuals, only adds to the excitement and curiosity of fans about "Last Dance," the group's new single released exclusively through the UNIVERSE Music platform.

Debuting in 2018, the Cube Entertainment girl group (G)I-DLE made their debut with the EP "I Am," led by its title track "Latata." The group immediately rose to be the year's monster rookies and with their third mini-album "I Trust," they set their highest-selling album with 100,000 physical copies sold in just three days. It earned them the distinction as one of the most successful acts in K-pop outside of the "big three" record labels: SM Entertainment, YG Entertainment, and JYP Entertainment.

Furthermore, (G)I-DLE is also notable in the industry as being one of the most involved in the creation of the songs they release. Particularly, Soyeon, Minnie, and Yuqi being involved in the composition of a large part of the group's tracks.

Also in 2020, (G)I-DLE released their first single album, "Dumdi Dumdi," which logged more than 94,000 copies sold on its first week and making them only the second group to achieve this single album sales record.