To be live streamed from the globally renowned Yes24 Live Hall in Seoul, Korea, the 'K-Pop SuperFest" by events specialists Sessions and Joy Ruckus Club is poised to be this year's largest K-pop festivals in the world, virtual or otherwise - and here are the stars set to make the event memorable!

The events organizer behind the eye-opening "I Hate Being Hated" virtual fundraiser, Sessions, has teamed up with the producers of the largest Asian music festival, Joy Ruckus Club, to bring another historic event.

Set on Sunday, June 19, the K-Pop SuperFest will be bringing together some of the industry's most famous names. Tickets and additional details are available at the official Sessions-Joy Ruckus Club website.

Despite being a one-day event only, K-Pop SuperFest fills the lineup and extends the reach to a whooping 194 countries and 18 different languages.

Furthermore, a variety of merchandise such as commemorative t-shirts, NFT videos, autographed posters, and the chance for an exclusive one-on-one meet and greet opportunities with the participating artists will be available on the Sessions website.

Check out the lineup of the K-pop stars fans can expect in this year's "K-Pop Superfest"! 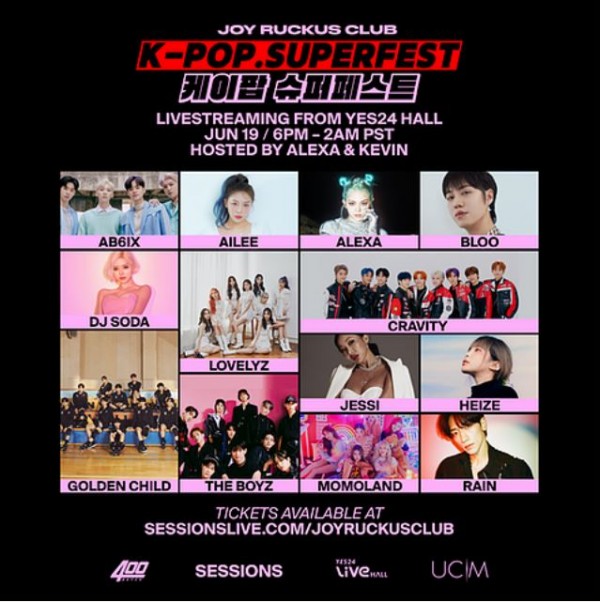 The four-piece boy group is made up of idols even before they debuted as a unit. Members Woojin and Daehwi previously appeared on the K-pop survival show Produce 101 and made it as members of the K-pop boy group Wanna One. Donghyun was a former member of the duo MXM while Woong was a highly-anticipated "Super Trainee." AB6IX made their debut in May 2019 and have recently released their fourth EP "Mo' Complete: Have a Dream."

The Korean-American artist Ailee was born in Colorado and grew up in New Jersey. She has been a staple of the K-pop industry ever since she moved to South Korea in 2010 and made her debut in 2012. The vocalist has released a number of commercially successful singles, including six songs in the Gaon Digital Chart top five.

Born Alexandra Christine Schneiderman, the Korean-American singer is based in South Korea and has been a participant in both seasons of the reality TV show "rRising Legends." Now signed with Zanybros, she made her debut on October 21, 2019 with the song "Bomb." Aside from her career in the K-pop industry, AleXa is also set to make her acting debut in the Netflix horror anthology "Goedam 2."

Born in South Korea, the hip-hop artist grew up in the US, where he gained his musical sensibilities. Bloo co-founded the hip-hop label MKIT Rain together with his fellow artists Nafla and Loopy and they moved back to Korea in 2015. A year after, Bloo made his debut with the single "Drive Thru." He has immediately set himself apart from his contemporaries with his distinct voice and jazzy styles, commanding attention from both local and international hip-hop media outlets.

The nine-member group under Starship Entertainment made their debut on April 14, 2020 and immediately introduced themselves as Super Rookie. Their debut mini-album, "Season 1. Hideout: Remember Who We Are," immediately topped the South Korean album charts and they finished their debut year with a number of awards from various music awards events in the country.

The internationally renowned South Korean DJ began her career in 2013 and two years later has started her global headliners with the Korea World DJ festival. She made her debut with the EP "Closer," made through the Warner Music Group. She also launched a collaborative project with labelmates Sistar. In 2017, she also performed at the S20 Songkran Music Festival in Thailand, which is among the world's largest music festivals.

A ten-member boy group under Woollim Entertainment, Golden Child made its debut on August 28, 2017. Their entry into the K-pop music scene broke the seven-year hiatus from the talent management agency since the legendary group Infinite. Carving a unique image, Golden Child made strong impressions with their EDM-based musical style characterized by bass-heavy rhythms and an equally complex choreography.

The P Nation rapper, vocalist, songwriter, composer, and producer has been making waves ever since she made her debut with her self-titled EP. She only garnered more mainstream attention when she joined the Mnet reality rap survival show "Unpretty Rapstar" in 2015. Under her current label, Heize released her seventh EP "Happen" last May 20.

Also born and raised in the US, Korean American rapper-vocalist Jessi also joined the 2015 program "Unpretty Rapstar," where she finished 1st runner up. But even before she joined the competition, she had already made her debut with the single "Get Up" back in 2005 and after a break from the industry, she returned in 2014 as a member of the hip-hop group Lucky J. Now an icon in the Korean hip-hop scene, Jessi recently released the digital single "What Type of X" last March 17 and is now set to command the stage as she comes to the Sessions and Joy Ruckus Club event, "K-Pop Superfest."

The Woollim Entertainment girl group has been charming the hearts of fans around the world since they debuted in 2014. Composed of eight members, the K-pop group has been known for their cute and fresh concepts, sharing love and happiness through fun and upbeat tracks. Since their first album "Girls' Invasion," LOVELYZ has released two studio albums and seven EPs in total.

The members of the MLD Entertainment girl group were the winners of the 2016 reality survival show Finding Momoland. Shortly after they released their debut mini-album, "Welcome to Momoland," on November 10, 2016, the group steadily built its fanbase in Korea and the rest of the world. They skyrocketed in 2018 with the single "Bboom Bboom," which peaked at number 2 at the South Korean singles charts. Momoland is currently gearing up for an American market breakthrough after signing with ICM Partners last 2020.

Born Jeong Ji-hoon, Rain is perhaps one of the Korean entertainment industry's pillars in the global stage. Starting his career at 16 years old as a boy band member, he found commercial and critical success with his solo album "Bad Guy," back in 2002. Establishing his music career as Rain, he went on to release six Korean-language albums and one Japanese-language album. Aside from being a K-pop star, Rain also led a number of successful television dramas and films, including 2004's "Full House" and the 2009 Hollywood movie "Ninja Assassin." Now, Rain is set to join the all-star roster in this year's "K-Pop SuperFest."

Formerly known as Cre.kerz, The Boyz is an eleven-member boy group from Cre.ker Entertainment. They debuted in December 2017 with the EP "The First," followed by "The Start" (2018) and "The Air." Aside from their multiple awards and recognitions as a K-pop boy group, The Boyz also won the South Korean reality show "Road to Kingdom," ensuring their spot in the upcoming "Kingdom: Legendary War."