(G)I-DLE Soojin is currently facing bullying allegations after an anonymous person who claims to be an older sibling of the idol's victim detailed what happened during their middle-school days. And just recently, actress Seo Shin Ae made a cryptic Instagram Story, hinting at being the victim of the singer's alleged bullying.

On Feb. 20, one netizen who claimed to be an older sibling of (G)I-DLE Soojin's bullying victim posted on an online community. The older sibling (referred to as "A") stated that her younger sister and the "HWAA" singer both went to Waw Middle School in Hwaseong City in Gyeonggi Province, Korea. The netizen also said that the artist slapped her sibling, took her money, and bullied her.

The younger sibling (referred to as "B") also spoke up and said that the K-pop idol took other people's uniforms and wore them, borrowed money and didn't return it, cursed at other students, stole other people's belongings, and more.

In response to the bullying accusations against (G)I-DLE Soojin, the artist's management agency Cube Entertainment said that the claims about her school violence were not true. The label added that they are planning to take legal action under criminal law.

Despite the agency denying the bullying allegations against the "HANN" singer, the issue remains a hot topic as many continue to step forward and claimed they also experienced violence from the K-pop star. On top of that, many believed one of the bullying victims has recently posted an indirect response to Cube Entertainment's statement.

What made many think the Korean actress is involved is because the netizen who first accused the singer of being a bully briefly mentioned a "Miss Seo" in her claims.

In the post, the anonymous person stated, "I remember talking to Miss Seo about you. Every day, you screamed behind her while on the way to school. You said things like 'You little b*tch' and 'You bbangu ddongu.' When she talked about school bullying in one interview, you actually confronted her with a group of your friends. I don't know if you'll remember, but I was there with her."

Back in 2012 when the Korean actress was interviewed about her bully role on the show
"SOS - Save Our School," she revealed how she was a victim of school bullying as a middle-school student. 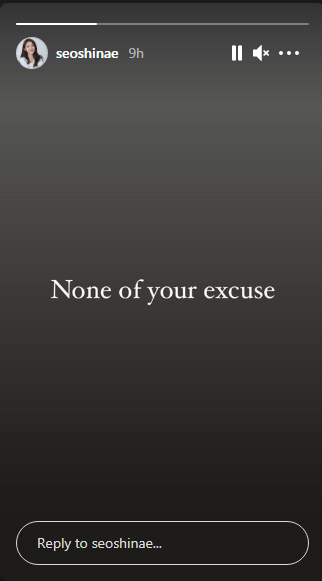 Because the iconic nickname "bbangu ddongu" was mentioned in the netizen's post, fans believe that the "Miss Seo" refers to the Korean actress. What fueled the thinking that Seo Shin Ae is (G)I-DLE Soojin's bullying victim is that the actress made a cryptic Instagram story, which reads, "None of your excuse." Although it doesn't reveal much, fans think of it as the celebrity's indirect response to Cube Entertainment's statement denying the accusations against the K-pop idol.

What can you say about this issue? Let us know in the comments!