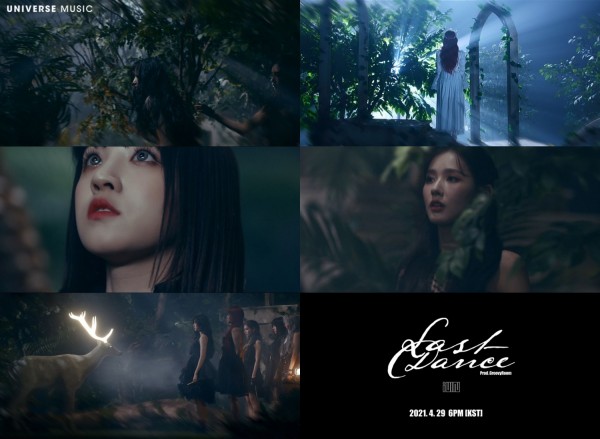 Titled "(G)I-DLE  - Prologue: The Witch Queen," the short film was released by NCSoft and Klap on the UNIVERSE official social networking sites. The 40-second featurette shows the members Miyeon, Minnie, Soyeon, Yuqi, Soojin, and Shuhua dressed in black and wandering around a forest in search of a "hidden queen."

Filled with ghostly-looking creatures, ruins, and thick foliage, the members end up face to face with a deer with glowing antlers.

"We'll find the hidden queen for sure," the narrator declares as the screen cuts to black, showing the title card for "Last Dance (Prod. GroovyRoom)." The new (G)I-DLE  single, their first under the UNIVERSE Music series, is set to be released on April 21, at 6 PM KST.

The prologue film follows the concept photos for "Last Dance (Prod. GroovyRoom)," that shows the members' unique charms in a mysterious and suspenseful way - inviting more curiosity and excitement from their fans.

Together with (G)I-DLE is the South Korean hit making duo GroovyRoom. The DJ, music producing, and song composing pair of Park Gyu-jung and Lee Hwi-min has worked with some of the largest names in the Korean music industry, across various genres. From rappers like Giriboy and Sik-K, to former 2PM leader Jay Park and 2NE1 member Minzy, GroovyRoom is now set to lend their unique musicality with members of (G)I-DLE.

On the other hand, (G)I-DLE became known as the monster rookies at the time they debuted. Having released six extended plays (EP), one single album, and eight digital singles so far, the group has been noted for actively participating in the composition of their songs. Korean news outlets noted them as "self-producing" idols" capable of pushing the boundaries and breaking stereotypes.

Aside from the writing and composition of their songs, members of the girl group also participate in the creative process involved for their music videos, photoshoots, and even the production of their outfits.