Out of the 99 contestants of Mnet's "Girls Planet 999," only nine of them will make it to the final lineup of the project girl group that will debut. Want to know the plans for this nine-member act? Then, keep on reading!

On July 9, Korean media outlet JoyNews24 revealed some information about the promotion of the upcoming girl group, according to multiple broadcasting officials. The details include the company that will manage the girls and how long they will be active as a group. 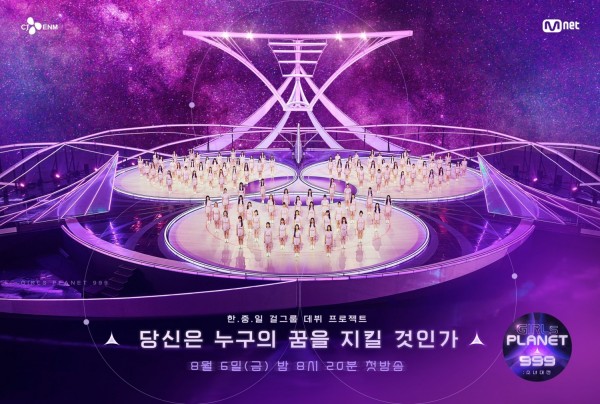 According to JoyNews24, the broadcasting officials told them that the project girl group formed through Mnet's "Girls Planet 999" is most likely to promote for two and a half years.

They added that the company that is highly likely to manage the Top 9 "Girls Planet 999" contestants will be CJ ENM. If this would be the case, this is the first time that CJ ENM itself would take responsibility for their project group.

The officials further stated that there is also a strong possibility that Wake One Entertainment, an affiliate of CJ ENM, will manage the "Girls Planet 999" girl group.

They went on to say that CJ ENM would also probably establish a new label that will be the girls' agency.

In addition to this, CJ ENM's influence throughout the activities and album production for the girl group would be stronger compared to the previous acts.

As mentioned above, the "Girls Planet 999" contestants who will debut would be active in the entertainment industry for two and a half years, the same period as IZ*ONE. However, there will be a difference between the two girl groups.

The broadcasting officials stated that after two and a half years of activity of the "Girls Planet 999" girl group, there is a possibility that some of the members will form a unit.

The girls' range of activities is expected to expand further in a way that they will not only carry out group activities in the future.

On July 6, Mnet announced that starting from August 6, "Girls Planet 999" will be broadcast every Friday at 8:20 p.m. KST. A total of 12 episodes will air from August to October.

On July 8, Mnet officially revealed some the faces of the 99 "Girls Planet 999" contestants, which come from South Korea, Japan, and China. Among them are a few of the familiar faces in K-pop, including CLC Yujin, BVNDIT Seungeun; BUSTERS Yeseo; Evermore Muse Sunwoo; Fanatics members: Rayeon, Chiayi, and Doah; Cherry Bullet members: Jiwon, May, and Bora.

Check out the teaser below!