An old video of BTS member RM and TWICE member Nayeon has resurfaced, and people are convinced they high-fived each other. But did they? Find out here!

An old video of BTS member RM and TWICE member Nayeon at the Seoul Music Awards in January 2019 has resurfaced, making its rounds on TikTok, Instagram, and YouTube. In the clip, numerous idol groups are seen walking around the stage, greeting one another as they pass and waving at their friends.

ALSO READ: Korean Streaming Platform FLO Under Fire after Songs by Artists Including BTS and IU were Excluded from the Chart

In the clip, RM and Nayeon are seeing walking past each other. Right as they are next to each other, the two idols are seen raising their hands, which has led people to speculate that the two shared a high-five. However, their hands are momentarily blocked by ASTRO's Cha Eun Woo hugging BTS's J-Hope, so fans do not know for sure.

This has caused debate among fans. Some fans believe that the two did, in fact, high-five, while others say it is more likely that the two simply waved at each other. Some have analyzed the video further and claimed that RM patted Nayeon on the shoulder instead of high-fiving her. This has caused many to be interested in their relationship with each other. 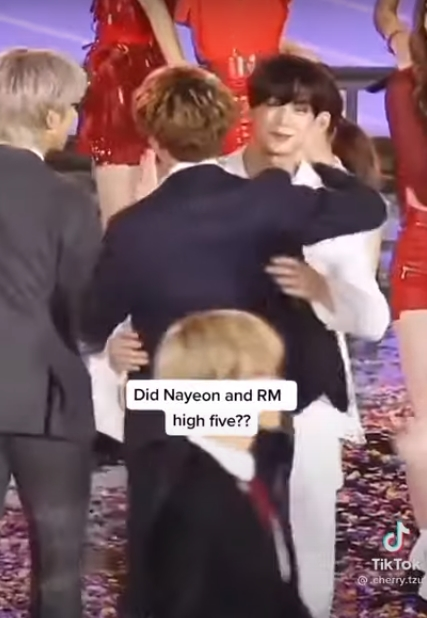 But did they actually high-five? Find out below!

Sorry, Guys — BTS RM and TWICE Nayeon Did NOT High-Five

ALSO READ: NCT Dream, BTS, and EXO Baekhyun are the Top 3 Most Influential Artists in the First Half of 2021 + See Top 10

Nayeon raised her hand to wave at fans on the left side while RM greets fans on the right side. It just so happens that the two decided to wave at fans at the same time as they passed by each other. The angle of the video makes it appear that they shared a high-five, but different angles of the clip show what truly happened.

While fans agree that it is possible they are friends — both idols attended Apgujeong High School in Gangnam, though RM was a grade above Nayeon — it is agreed that they would much rather keep whatever relation they have to themselves instead of having such public interactions.